2009 Bajaj Pulsar 180 has been quietly launched and is out in the showrooms and also on the street.

I just spotted one yesterday on the streets of Delhi and it looked fantastic! Thanks to its rider who choose to stop in the middle of the road to answer the phone call, I managed to capture this photograph of the new 2009 Pulsar 180. 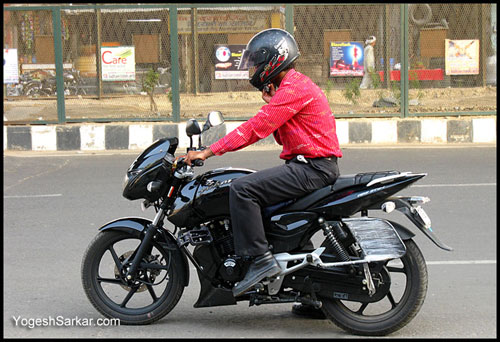 On the power front, 2009 Bajaj Pulsar 180 only has half a horse more than its predecessor (17.02ps for Bajaj Pulsar 180 UG4 vs. 16.51ps produced by Pulsar 180 UG3) and that too to a certain degree gets negated by the 5kg weight gain 2009 Pulsar 180 receives due to better and thicker front suspension and swingarm (borrowed from Bajaj Pulsar 220 DTS-Fi).

While there are numerous other updates in the 2009 Pulsar 180 (you can read about them here), other thing that is immediately apparent is the tank extension of the Bajaj Pulsar 200, that I quite liked when it came out.

Overall itâ€™s a nice motorcycle and even though there are plenty of Pulsar on the road and there are a few better looking motorcycles in the market, it still doesnâ€™t look outdated or bad and in fact if your bike is shiny as the one in the above photograph, it would certainly attract second look from passerby.