A few days back I wrote a blog post on why I would never buy a bullet, today I am writing about the kind of Royal Enfield Bullet I would like to buy, if Royal Enfield ever chooses to produce it.

Improved reliability: Irrespective of how much or how little you like to work on your motorcycle, a more reliable machine would definitely be a boon for you while out touring. After all it is not like that Royal Enfield motorcycles are cheap, I am sure with the amount of money a Royal Enfield owner shells out or is willing to shell out, Royal Enfield can certainly do a thing or two about the reliability factor and if that leads to a slight price increase, then I don’t think any would really mind.

Another thing I would like to see in the reliability front is the ability to start the motorcycle, even if the battery is completely dead. I know it is possible in certain models, but not sure which one. But would certainly like to see this implemented across the board, after all if other motorcycles can be started without battery (though Bajaj is going backwards on this idea), why not Royal Enfields?

Of course electric starter should also be good and reliable one as well, as it really comes in handy in case you get stuck somewhere.

Improved fuel system: Have seen plenty of bulletiers cringe about the fact that the stock carburetors of Bullets are rather limiting, apart from this I have also seen the mileage of bullets drop by 20-25% while touring in high altitude areas, while majority of other motorcycles only register a drop of 10-15%. While this might be due to the fact that Enfields are running richer, it is something that Royal Enfield R&D should pay attention to. Especially when they market it as a motorcycle for touring and in particular, in hills.

Extended warranty: If not as a standard option, at least as a optional thing? It would give me peace of mind while purchasing a motorcycle, if I know that for 40,000-50,000kms or couple of years, I would only be spending on consumables and my bike would be taken care of.

18-20 liter petrol tank: While in a way it goes slightly against below listed point, but having a slightly higher fuel capacity is something that all tourers would appreciate. After all if 150cc motorcycles can have 16-18 liter fuel tank, why shouldn’t a bullet? It would save the trouble of getting an aftermarket petrol tank, which all those who love touring in remote areas, often end up getting. 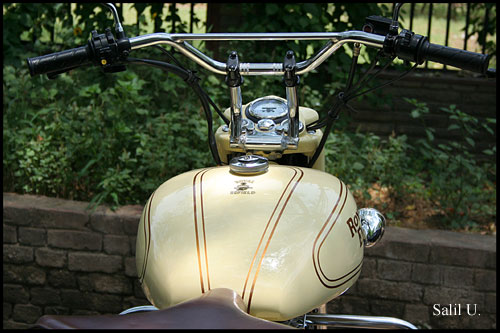 Lighter than the current models: If I were to buy a Royal Enfield motorcycle, I would like it to weigh around 150-155kg. This would not only put it in the same weight category as Karizma and Pulsar 220 DTS-Fi, it would also improve power to weight ratio. For this to happen, Royal Enfield might not even need to make any drastic changes to the engine, though a slight weight reduction would surely be needed, though majority of it would end up coming from the looks section, which for me is a non issue.

Brighter headlight: 55/60w headlight as a stock option would be quite better than the 35/35w headlight that 350s come with and 45/40w that the 500 comes with. Even those who ride inside the city, should benefit from it, for tourers it would be a blessing.

Slightly upswept exhaust: Not a big deal, but should help while one is crossing a nallah or a stream. Though it would end up reducing the amount of luggage that can be mounted.

Cigarette lighter socket: This would not only help recharge mobile phone/GPS/camera battery (good for those touring in remote areas), it would also work with the portable electric compressor, which is a must carry accessory while touring. Touring motorcycles abroad already have this option and it can be fitted easily in just about any Indian motorcycles as well, but things are just more reliable, if they are factored in while designing and producing a motorcycle.

Well these are just some of the things that come to my mind as of now, and although I wish to see them implemented across the board, it would be the UCE based Machismo that I would like to see all this being implemented on and would seriously be interested in buying one.

Of course no one knows the bike as well as its current owners, so let me know what you guys think and feel is missing from your Royal Enfield and would like to see in future. Then maybe the Royal Enfield R&D guys can go over it and create a motorcycle which doesn’t needs to rely on the legacy of Royal Enfield to sell, and would genuinely be interesting for tourers like me.