If I was asked to describe this movie in couple of words, they would be, simply hilarious!

Yes thatâ€™s right, this movie is simply hilarious and a complete laughter riot. I enjoyed it much more than Om Shanti Om, which I felt was quite a good movie as well.

The movie is about a rich guy, Aditya Kashyup, played by Shahid Kapur. Whose father has just died, mother has eloped with some one and love of his life has just gotten married to some one else (talk about a sad character) and is so depressed that he wants to end his life.

That is until he meets Geet; played by Kareena Kapoor. Geet is typical Punjabi girl (loves to talk, bubbly and fun to be around) and is on her way to her parentâ€™s house and is planning to elope with her boyfriend.

Because of Shahid, Kareena ends up missing her train and thus starts an interesting journey of both to Kareenaâ€™s house. A journey that is able to completely turn Shahidâ€™s world upside down and change his outlook towards life. What happens next is what usually happens in Bollywood movies, boy falls in love with the girl yet gives her up for her happiness only to find her drifting back to him. Yet it has enough subtle changes and lively moments to keep you glued to the chair.

Due to this, Jab we met gets 8 out 10 and a must see recommendation from me. 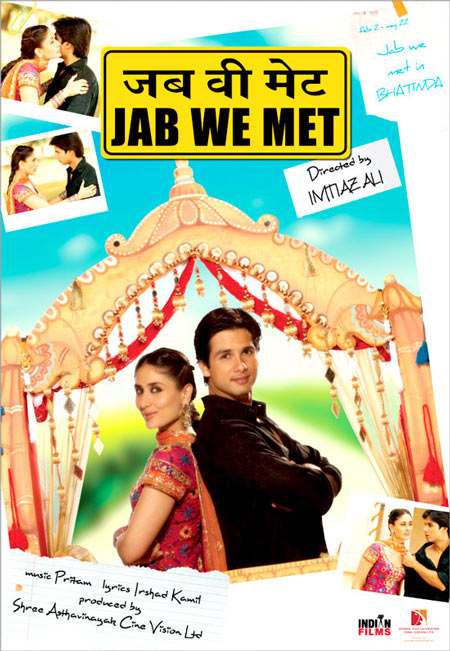