On this Saturday I went to the Lotus Temple (BahÃ¡’Ã­ Mashriqu’l-Adhkar (BahÃ¡’Ã­ House of Worship)), situated in New Delhi.

To say the Lotus Temple is beautiful would be an understatement; itâ€™s a stunning piece of architecture and is wonderfully designed and built. It is surrounded by well kept lawns spanning over 26 acres; give it an even more stunning appearance.

Here is a little background on the Lotus Temple:

The BahÃ¡’Ã­ House of Worship in Delhi, India, popularly known as the Lotus Temple, is a BahÃ¡’Ã­ House of Worship and also a prominent attraction in Delhi. It was completed in 1986 and serves as the Mother Temple of the Indian subcontinent. Inspired by the lotus flower, its design is composed of 27 free-standing marble clad “petals” arranged in clusters of three to form nine sides. The architect was an Iranian, who now lives in Canada, named Fariborz Sahba. The major part of the funds needed to buy this land was donated by ArdishÃ­r RustampÃºr of Hyderabad, who gave his entire life savings for this purpose in 1953. (Source: Wikipedia)

This was the perfect occasion and place to test my newly bought Canon Powershot A720IS digital camera and this was one of the first landscape photographs I captured with it. 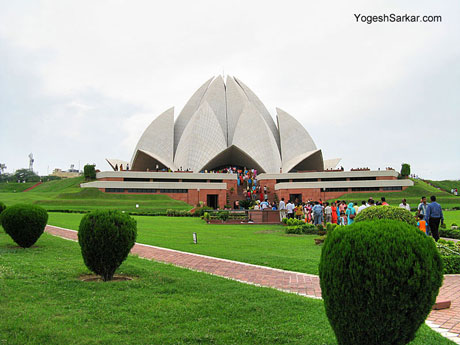 As I was about to leave the temple, I heard a slight commotion and saw people standing and looking towards a section of the lawns. It turned out that a large snake had been spotted and temple authorities had called in snake catcher who had finally managed to capture the snake and from the looks of it, quite humanely. 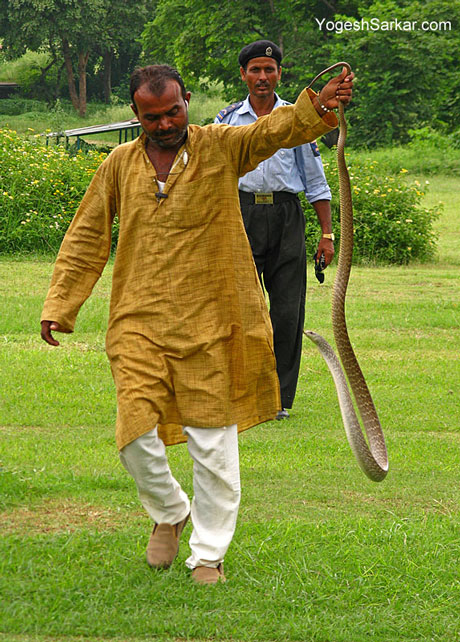 As the snake was whisked away from the frightened and curious crowd, it was time for me to bid farewell to Lotus Temple and get on my way.

Tip: Lotus Temple is a small walk from the Nehru Place bus terminal, take the second left turn which seems to be going upward and walk for few hundred meters to reach the temple.