Recently I bought 2 pairs for Uniross 2500mAH Ni-MH rechargeable batteries for my trip to Sach Pass. I tested these batteries in my Canon A720IS digital camera and here is my review.

At Rs. 540 for two pairs, they were quite economical, though initially my Uniross Globe Trotter Pocket Charger had an issue charging them and would show them as charged after ~10minute of charging. Thankfully Uniross X-Press Mini Charger that I rarely use had no issue charging these batteries, though charging time was well over 24hours. 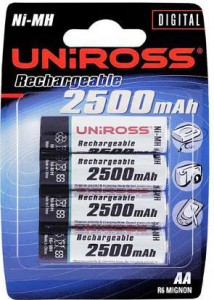 I got the batteries charged a day before I left for the trip and used the same pair for first two and a half days of photography, which meant roughly 370 photographs, including roughly a dozen long exposure shots and five short video clips with a combined play time of roughly two and a half minute. All the while image stabilization was on and I must have reviewed each and every image at least 3-4 times. Add to this, operating conditions were far from ideal with a mixture of warm humid climate to snow fall and plenty of rain.

The second pair has already shot well over 200 photographs and videos and still isnâ€™t showing any sign of dying down and would most probably last for 100-200 shots.

Overall I am quite satisfied with the performance of Uniross 2500mAH Ni-MH rechargeable batteries, now the only thing remains to be seen is whether or not they will get charged by my Pocket Charger, because thatâ€™s the one I usually prefer to use.