Today I got a call from a dear friend and riding buddy, Bhuwan.

He is currently in Leh and was telling me about the bad weather he has been facing, ever since he started his journey, early this month.

It seems Mother Nature is furious this year and is letting her anger be known, in the form of heavy rain and snowfall, which is not at all usual in the month of September. 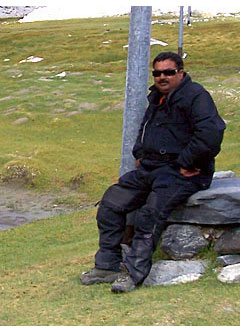 According to Bhuwan, there is heavy snowfall at both Khardung La and Chang La, which is making it impossible for him to visit Nubra Valley and Pangong Tso. Even Leh is receiving more than its fair share of rainfall.

While the situation is somewhat grim, I can not help but imagine how challenging and fun the ride would be at this moment, especially considering that in the past three years (2005-2007), I have spent the better half of September, in Ladakh and I had planned to go there this year as well, and that too with Bhuwan.

Unfortunately, I had to cancel my plan due to family commitments. While I have no regrets about this decision, I can not help but dream, how it would feel to be in Leh at this moment, sipping tea at the main market with light showers for company, watching the snow clad peaks in the distance that I am about to conquer.

Last year during our trip to Ladakh, Bhuwan and I had made elaborate plans to return to Ladakh with more time in hand and explore this beautiful place at a slow pace, to ensure that we can not only get the thrills of riding in worldâ€™s highest and coldest desert and on some of the toughest roads, but are also able to soak in the beauty around us.

A pity that I was unable to realize this dream this year, though from the looks of it, Bhuwan would be planning to go back to Ladakh next year and hopefully at that time, Iâ€™ll be able to give him company and we will able to realize our dream of exploring Ladakh, not only through man made roads, but also through trails which we make ourselves.