Few days ago I bought a Zebronics Bijli cabinet from Nehru Place and after having properly set it up and used for a few days, I feel it is time for a short review.

First off the things I liked about Zebronics Bijli:

Zebronics Bijli cabinet is a budget gaming cabinet from Zebronics and is one of the most airy budget cabinet one can buy in India.

For starters, its entire front section is made up of plastic mesh to let in plenty of air and it comes with a 120mm front LED fan and 2 x 80mm side fans. There is also room to mount another 120mm fan in the rear, no wonder then it is a hot favorite amongst overclockers and gamers on budget.

Zebronics Bijli has enough space to accommodate 3 x 5.25â€ drives bays, 3 x 3.5â€ drives bays and 1 x 3.5â€ exposed drives bays. Apart from this, it also has four USB ports, audio out and mic in jack at the front. These are located at the top of the cabinet, which makes connecting gadgets to them an easy affair.

Side panel also has thumb screw to ensure that you wouldn’t need a screw driver to open the side panel, however thumb screws aren’t provided to mount drives.

Zebronics Bijli is also quite nice to look at, especially when the computer is switched on. 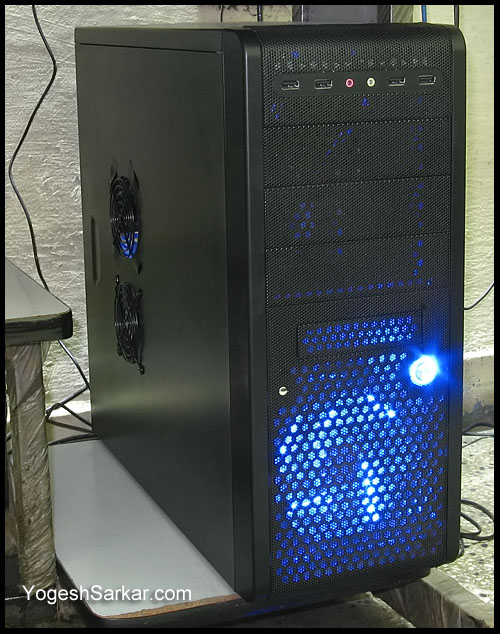 Zebronics Bijli with side panel removed and with my C2D E4500 and Gigabyte 945GCMX-S2 motherboard and 500 generic SMPS. 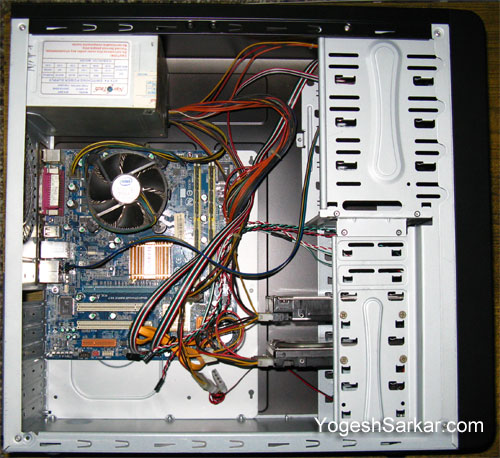 All three bundled fans are quite slow and on top of that, all of them are attached to suck in air! So I had to reverse mount one of the fan on the side to work as an exhaust and attached the second fan at the rear and also reverse mounted it to throw out air.

If you like to overclock or have a high end graphics card, then donâ€™t forget to throw all three of them out and get two 120m high cfm fans. For normal users, stock fans are more than enough, as long as you reinstall the two 80mm fans to work as exhaust.

Then there is the issue of sharp edges, which are likely to leave your hand with slight scratches while you are assembling your computer. Thankfully those arenâ€™t sharp enough to cause deep enough cuts to cause bleeding.

Zebronics Bijli is also a fingerprint magnet and if you keep your computer cabinet on top of your desk then you will surely get tired of cleaning the finger prints left off by its admirers. Build quality isn’t that solid either, though it is unlikely to fall apart.

However these niggles are a small price to pay for this rather good looking airy cabinet, which comes at such a nice price (Rs. 1250 without SMPS).