I had gone to the screening of Riding solo to the top of the world and One crazy ride on Sunday, while I waited till now as I don’t have the photograph of me with Gaurav Jani (a friend took it), I guess I should post the experience now and add photograph as and when I get it from him.

Although I was expecting quite a few BCMTians and other bikers and travelers to be present at the screening, I didn’t really expect to find almost the entire auditorium be filled with people, of which around 30 or so were from BCMTouring.

The show started with One Crazy Ride, which is a documentary filmed in Arunachal Pradesh and depicts journey of five riders, who are trying to find a route from one corner of Arunachal Pradesh to another, which is made interesting by the fact that the road which used to exist, has fallen into disuse and locals and travelers have to basically use roads in Assam to reach other parts of the state and even the locals don’t know about it!

The documentary actually got interesting (at least for me) when four of the team member had to abandon the trip midway due to time constraints and bike issues 😀 and Gaurav decides to continue with the journey alone. Traveling through some of the toughest routes, trying to find way to reach his destination and all the while, documenting each and everything on his video camera.

Here is a photograph of the One Crazy Ride team, who were present at the venue. Sorry about the picture quality as bags weren’t allowed inside so this photograph was taken with the help of my 1mp mobile phone camera and that too from distance. 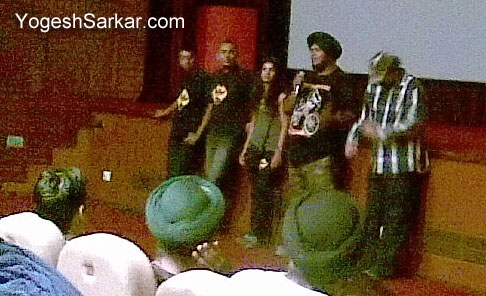 After One Crazy Ride was over, I had to head out to parking to transfer my helmet and bag from one car to another as Amit had to leave. En route I met Ashwani Khanna, a fellow motorcycle tourer, who I admire a lot as well.

Thankfully I managed to come back before theÂ  screening of Riding solo to the top of the world begun. The documentary is about Chang pas, who are nomadic people who inhabit Changthang Plateau in Ladakh. What makes this documentary special is the fact that Gaurav was traveling alone on his motorcycle and was the one man crew, documenting not only Chang pas, but also his travel from Delhi to Ladakh.

While I have heard from quite a few people say that they found One Crazy Ride better, I personally felt Riding solo to the top of the world was far better, most probably because I could relate to it, being a solo motorcycle tourer. Not only was the landscape wonderful, but also the people and culture Gaurav documents.

It was made even more special when Gaurav heads to Hanle to attend a Chang pas festival, where monks were praying for rains as weather had been particularly bad that year and before the prayers were over, rain began! Miracle or coincidence, it makes the whole experience of watching the documentary even better and enriching.

After the documentary was over, I went up to Gaurav to congratulate him on having made such wonderful documentaries and was surprised when he told me that he had heard about me (hope it wasn’t for all the Enfield bashing :D). We had a small chat before bidding farewell and it felt great to having met him in person and having the opportunity to talk to him.

Ps. Gaurav is planning to showcase the documentary in various cities over the next few months, I’ll try and post the info, if and when I get it and in case you are in that city, make sure to go and watch to documentaries and meet the man in person, else buy the DVDs!