Every day I come across people who ask about a route in Ladakh, which does not exists on paper or in reality! And each time it is due to the fact that they are looking at Google Maps, instead of real maps. In fact it has gotten to a point that I don’t even ask which maps they looked at and simply tell them to stop looking at Google Maps!

Take for instance the below screen shot of Zanskar Valley in Google Maps, which shows a road going from Padum in Zanskar Valley to somewhere on Manali – Leh highway, way ahead of Darcha, which then merges with National Highway 10 (not shown in below screenshot). A highway which runs between Fazilka in Punjab near the Indo-Pak Border and Gurgaon! 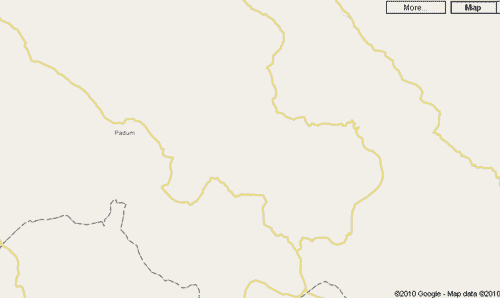 Seriously if you are at all serious about planning your trip to Ladakh, then please either get a real map from Nest and Wings or checkout the maps created Bharat, which are much more detailed than anything you will be able to find on net or in bookstore and contain roads which actually exist in real life!

Here are links to map created by Bharat:

And this one, once again created by Doc Bharat.

Just goes to show that at least in India, there is no replacement for actual paper maps, which too at times are wrong or over optimistic, so always check with some one before try and head out on a route which might just turn out to be a trekking path or a dead end!