If you follow news and are in India, then you would have probably seen/read about Sonia Gandhi laying the foundation stone for Rohtang Tunnel yesterday.

While all that is good, what does it actually means for travelers like us?

Well here is the low down on one of most ambitious project to link Ladakh with rest of India, all year around!

While the press has been going gung-ho about the Rohtang Tunnel, which will cut down travel distance between Manali and Keylong by around 48km and would be open all year around and thus provide road connectivity for Pangi and Lahaul Valleys (Spiti would still only be accessible from Shimla side in winter, since there is no tunnel planned for Kunzum La), it is actually one of the crucial yet small part of making the Manali – Leh highway accessible all year around for troops and of course, travelers like us.

Key to this all weather road to Ladakh lies at Darcha, from where a new road is being built to reach Leh, through the Zanskar Valley, in order to bypass Baralacha La, which is much more treacherous than Rohtang Jot and thus can not be kept open, all year around.

The new all weather road to Ladakh would thus look like this, once completed: 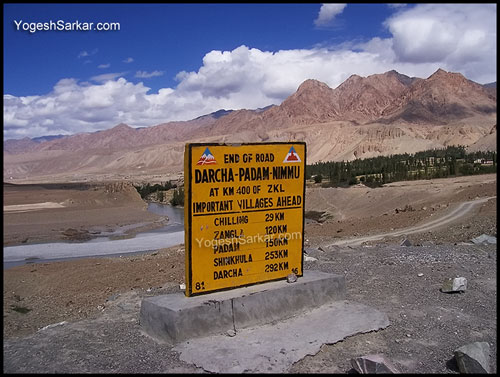 Not only would the proposed road only have one pass (Shinkhu La), it would also reduce the distance between Manali – Leh by approximately 60-70km, not to mention, would be easier to traverse than the Manali – Leh highway.

So once all these projects are finished, we would be able to go to Ladakh, by road, even in the dead of winter!

Of course this also means that our armed forces and locals in Zanskar and Ladakh would be able to get regular supplies in winter, which is crucial for a region, which is land locked for 5-6 months a year and the only place in our country, where Indian Army not only faces Pakistanis, but also Chinese!

Of course this isn’t the only project that Indian Government is working on, it is also working on the internal road network in Ladakh, in order to ensure easier, better and hopefully all year around road connectivity for most border areas, so that when travelers like us reach Ladakh in winter, we would not just be limited to Leh and a handful of places.

Update: Tenders have also been floated to build a tunnel at Shinkhu/Shingo La, which was the only high altitude pass on this route and would have likely prevented traffic from traveling on this route in winters.