If you follow me on Twitter and Facebook, you would already know that I have upgrade my desktop’s (workstation to be more precise) operating system to the latest one from Microsoft, Windows 7 Home Premium.

Change in operating system comes after a span of almost 8 years and being a XP loyalist for so many years, I was expecting to run into a few if not a lot of issues. Surprisingly, all the programs, including quite old ones, are working as well if not better than how they used to in XP and on top of this, the standard apps and games bundled with Windows 7 are better built than what was first available with XP.

There have been quirks and I am not really a fan of new windows explorer or for that matter, even the start menu. However I am in love with gadgets and the new taskbar and the ability to pin programs on it. 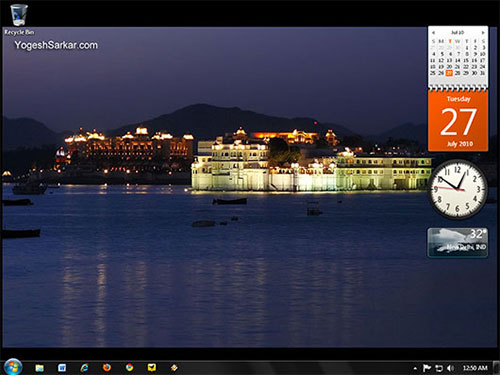 Although I have had to shell out Rs. 6123 for the license (promotional schemes ended a while back), I don’t really regret my purchase and I am hoping that this would be able to meet with my demands for the next 5-6 years and couple of computer upgrades (one planned for next year).

That is not to say that Windows XP wasn’t up to the task or was beginning to show its age, on the contrary, I still love it and plan to leave it running on my Netbook for the foreseeable future.

In case you are wondering, as usual for me, I did completely new install after formatting the primary partition and have had to reinstall all my software (good point to dump unnecessary stuff) and updates, which had kept me busy for the better part of yesterday.

Will post an update a little down the line and let you all know, how things are going.