The Age of Kali is the second book of William Dalrymple, that I have read and that too in the span of a few weeks.

While City of Djinns was a book focused on the history and culture of Delhi, The Age of Kali not only covers several parts of India, which William travels through during 10 years he spends in subcontinent, but also that of Sri Lanka, Pakistan and Réunion (an island in Indian Ocean, governed by the French Government). So simply terming it as a travel book on India wouldn’t be right, add to this, the author has purposefully written the book in a manner to reflect, that we are indeed living in Kali Yuga and thus has a negative tone throughout.

However, there aren’t any made up stories (as far as I can tell), just bad things which actually happen in today’s world and at times things about which we barely blink, while reading newspaper in the morning. 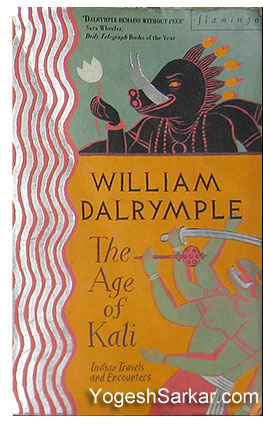 Due to this and the fact that I had already read City of Djinns, I managed to stick to the book, even though initially at times it felt quite slow and in the end I was glad that I had stuck to it, because it manages to reveal things which I didn’t know about, because, they had happened at the time, when I was still busy reading comic books and studying for my 4th grade exam!

Due to this, many of the things he talks about, seem rather distant, and yet manage to invoke faint memories, which my pre-teen mind must have witnessed or heard about.

However, this is yet another book by William Dalrymple, which I wouldn’t acknowledge as a travel book and would instead categorize as political commentary about the events which occurred at that time, in front of an expatriate, working in the subcontinent.

One major complaint that I have about this book is the fact that author has deliberately tried to avoid writing about certain events, in order to push through his point of view. For instance, while LTTE and Sri Lanka has a chapter devoted to them and that too in Indian context, there is not a single word about LTTE’s assassination of the Ex-Prime Minister of India, Rajiv Gandhi in 1991. An event, which if described in the book, would have easily shifted the somewhat neutral opinion he expresses (bordering sympathy for the rebels) about the turmoil in Sri Lanka.

Apart from this and the fact that at quite a few times, The Age of Kali seems more like a collection of essays than a book and doesn’t have a certain flow, which you would otherwise expect out of a normal novel.

However, despite these shortcomings, The Age of Kali was a good read for me and I would certainly recommend it, even though it paints a somewhat negative and gloomy image of India.