I initially thought of reading A Spoke in the Wheel, after it was recommended to me, by my sister. Mainly because my favorite king in the Indian history is Ashoka the Great and this novel hovers around Upali, a Buddhist monk, who has been commissioned by Ashoka to write Buddha’s life story for the first time in history.

While the narrator (Upali) paints a very grim picture of Ashoka, majority of the time, irrespective of the good things which are going on around him, due to the same emperor, it is somewhat offset by other characters, who go to great lengths to praise the king and his work for the Dhamma and Sangha. 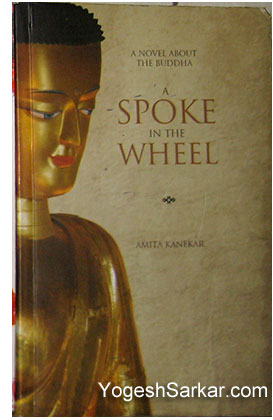 Having said that, this book really isn’t about Ashoka and neither is it entirely about Buddha; it is about a monk (Upali), whom the author has concocted for narrating her part fiction and part history novel and even he disappears from the story half the time, as it shuffles back and forth between the time of Buddha and Ashoka the Great!

Although that is to be somewhat expected from a novel, which claims to be “Historical Fiction”, it is really the author’s writing style, which is a big letdown (especially in the beginning) and just isn’t engaging enough to keep you glued to it.

Having said that, later on the narration becomes slightly better and chapters don’t feel as disconnected, as they do in the beginning.

Author also tries to present Buddha, not as a God, but as a confused Prince, who is sensitive to the pain and suffering around him and feels dejected and disjoined from his own family and other’s from his own caste and stature.

Through Upali, the author tries to portray that although Buddha was quite wise and no doubt great, but he was still a normal and confused person, who dies unsatisfied; disillusioned by the same Sangha he created. Not only that, author also tries to show, how much further his followers had actually drifted away from his original teaching, couple of centuries after his death.

While all this is open to debate and no doubt ruffles your intellectual feathers and makes you think, however thanks to the narrative style, you are soon back in the world of Ashoka, forced to think about something else!

Overall, A Spoke in the Wheel was an ok read, not really that great, but not too shoddy either.