When I first added India with Sanjeev Bhaskar in my reading list at FriendsofBooks, I didn’t know that Sanjeev Bhaskar was actually the actor who was part of Goodness Gracious Me and The Kumars at No. 42. Both of which I had seen limited episodes of and had somewhat liked them.

While that might not have affected my decision to read this book in the first place, the fact that it is actually based on a documentary series and I could just have easily watched it, rather than having to read the book was something that would have certainly influenced my decision.

However after realizing this and knowing the character behind the book, I was hoping for a good account of travel in India with a somewhat Indian perspective with right dosage of humor thrown in and boy was I disappointed! 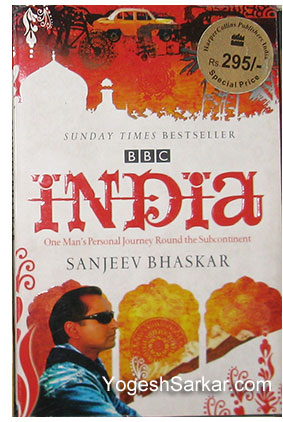 For starters, the author appears rather cynical and prudish and mostly concerned with showcasing his family history in India, while remaining oblivious to culture, history or religion, he is trying to showcase!

Hell I would have even settled for a foreigner’s view of India (which Sanjeev Bhaskar basically is), however this isn’t the case either and he appears confused with the identity and tone he is supposed to carry; should he come out looking as an English gentleman exploring an Ex-Colony or should he appear as a long lost son, returning to his homeland?

In the end, he manages to be neither and this fact isn’t helped a least bit by the fact that all his travels are rather hurriedly paced and showcase little if anything about the places he is traveling through and just appear as a vague consort of events, people and a few building; devoid of all important human touch, humility and a bit of romanticism, needed to keep an audience captivated!

To make matters even worse, his timeline is even more construed. For instance he arrives in Kolkata at time of Durga Puja, then witnesses Diwali (comes 20 days after the end of Durga Puja) and runs off to Darjeeling, only to reach Ponta Sahib 3-4 months later, to enjoy Holi. All the while adding nothing concrete for time wasted, offering no explanations and leaving you to conclude that he must have run back to UK and then returned to finish off the documentary, when he had spare time in hand!

The whole part about partition and going back to Pakistan (for less than 12 hours!) to trace back his father’s footsteps is rather loosely based and appears added just to win some brownie points to sell his book. In case this wasn’t the case, then I have to say, he doesn’t really knows how to pen down the emotions and his thoughts in an interesting manner!

Overall the only chapter I did like about the book was the last one, titled “Turn on, Tune in, Drop out”. Which carries quite a bit of emotion and is written quite beautifully and going by the rest of the book; likely by someone else!

Overall, I wouldn’t even term this book as a good read, though it does has a sadistic way of retracing footsteps of one’s forefathers and commenting on the enormity, which is India!