I have just finished reading, The Making of a Nation by B. R. Nanda and here is my short review on this book, which attempts to document and make sense of the entire Indian Freedom Struggle, in a concise manner.

Being a little weak in history, I didn’t knew who B. R. Nanda was, till after I had order the book and started reading its introduction, while knowing about him, wouldn’t likely have made me chose otherwise, it might have set a different mood at the beginning itself and might not have allowed me to read and understand it in a slightly open manner. 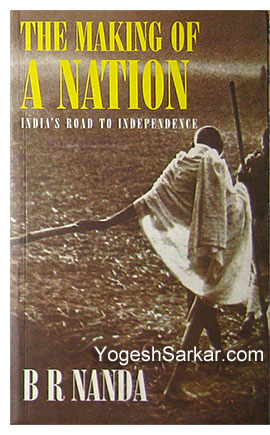 He is an historian and has written extensively about Gandhi, Nehrus and Gokhale and has even been the director of Nehru Memorial Museum and Library. Which is why, at times his tone reeks of a bias towards Nehru and the Congress, especially during the infancy of the party.

Apart from this, I also disliked the way Mr. Nanda comes out and tries to justify the stand of people like Syed Ahmed Khan, Muhammad Ali Jinnah etc. who tried to communalize politics from the beginning and in a way, stood in the path of democracy and national integration. In fact it isn’t till towards the later part of the book, that we start seeing some real criticism of the action of Jinnah and Muslim League!

Then there is a pattern of justifying a few stands/events by restating similar things again and again, which takes away some of the pleasure of reading this otherwise good book and makes one wonder about the first shortcoming I talked about (bias towards Nehru and Congress).

Apart from this, The Making of Nation is an interesting read and takes its readers back in time and showcases the different phases of the Indian National Struggle, which seemed to evolve continuously over time, before it adorned the character of a full-fledged and complete freedom struggle, we all have read about in our history text books.

Of course towards the end, the events seem to unfold a little too quickly and one is left gasping for breath, as the last decade of the struggle for Independence is compressed into a few chapters, even though, it ought to be considered the most important phase of Indian Independence Struggle and I feel, should have been given more coverage than what is there in the book.

But I guess, then it wouldn’t have been a 330 odd page book and would have turned into a massive compilation, which author wanted to avoid!

Overall it’s an interesting read and while I wouldn’t recommend The Making of a Nation to be read and understood as the de-facto history of the Indian Freedom Struggle, I would recommend it to be a part of a collection of books, which throw light on the epic struggle, which lead up to the independence of our India.