Couple of day’s back I got fed up of Firefox 3.8.x crashing repeatedly on my computer and decided to download and install Firefox 4, even though it is still in beta.

It’s been a long time since I last used a beta application and that too on my everyday install of windows. However, I needed a stable browsing platform and since I couldn’t switch to other browsers due to lack of essential plugins on other platforms, I was left with little choice but to resort to this!

To start with, Firefox 4’s new user interface is a living testimony to the great work done by Google engineers on the UI of Chrome and thus looks quite a bit like the Google browser, though there are differences.

This at least for me is a good thing, as it frees up quite a bit of viewable area from unnecessary clutter of toolbars and thus makes life easier for people like me, who are still stuck on CRT displays with 1024 resolution. Add to that, Firefox tabs are now individually viewable in the popup view of Windows 7 aero interface (here is a screenshot explaining it, click to enlarge): 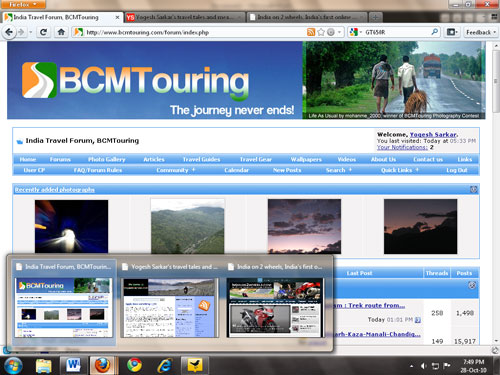 Browsing too has become faster, especially when it comes to cached pages and that is always a welcome move, though it still isn’t as fast as Google Chrome.

However, this is where the sweet dream ends and one encounters the bitter side of Firefox 4!

The new browser is a resource hog and as you can see from screenshot below, a simple thing as scrolling a page up and down on a not too heavy page, can push the CPU usage to around 50% and that too on my not too slow Core2Duo 2.20ghz processor! I shudder to think, what would happen to my netbook, if and when I decide to upgrade to Firefox 4 on it! 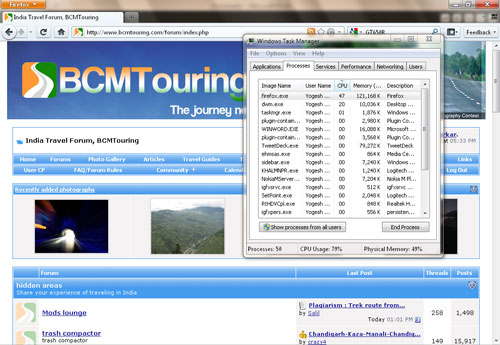 Which come to think of it, has always been an issue with new Firefox versions, as I distinctly remember the slowness that I experienced, after having switched from Firefox 2 to Firefox 3, and is something which ought to have been addressed by the developers, even in a beta version like this.

While I sincerely hope that the developers will wake up and do something about it, and hopefully as we get closer to gold launch, things will smooth out. However if that does not happens, I will certainly have to either look at going back to the Firefox 3 builds or switch to a completely different platform, because it is just too annoying!

Oh yes, thankfully Firefox 4 hasn’t yet crashed (though flash plugin did crash in it once already), so my fingers are crossed and hope is high for a stable, yet heavy browsing platform.