Off late I haven’t been getting much time to read books, so Churchill’s Secret War by Madhusree Mukerjee, took me quite a bit time to finish, even though once I started reading it, I found it captivating, inspite of a serious narration issue, which somewhat put me off (more on that later).

Churchill’s Secret War is a book on the condition of India and in particular, Bengal, during the Second World War, when India and Indians were thrust into action by its master of that time, Britain. Who despite being a democracy at home, was nothing more than a tyrant imperialist force and nowhere was this more greatly amplified than in the way they dealt with the famine in Bengal, which according to even their own estimate, was projected to cause 1.5 million deaths! 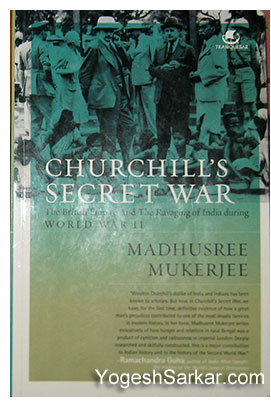 So while the world was up in arms for the holocaust being perpetrated by the Nazis in Europe, most remain aloof, even supported the one taking place in India, thanks to the policies of the occupying imperialists, who would rather see more grain being imported into Britain to produce beer and feed chickens or to be stored under the sky and rot, than to see it in the hands of the 3 million Indians (according to Dr. Amartya Sen), who lost their lives during that period!

It is this somewhat forgotten and unknown to even many Indian, aspect that not only portrays frivolity of “White Man’s Burden” but also the contempt with which, colonies such as India were being governed by nations, supposedly championing for free world and human rights!

While I didn’t really enjoy the narration bit where the author switches from one scenario to another, only to revisit the first one, later on, I did like the fact that author didn’t mince any words and at the same time, didn’t felt overly biased, when it came to sharing facts and stories, as told by the survivors.

Overall a really good read and an eye opener, not only about the British Rule in India, but also the degrading way in which our own countrymen acted, in order to either score some brownie points or just for the sake of sticking to their way of political thinking (Communists first opposed the war effort and later joined the government in silencing those opposing it and raising voice against the terrible famine in Bengal, just because “comrade” Stalin had joined the Allies!).