Yesterday evening (well only a few hours back) I attended Canon Edge Go Pro Photography Workshop, which is held each week in New Delhi, Mumbai and Bangalore and is free for Canon Edge Members to attend.

Canon Edge Go Pro Photography Workshop is a 3 hour long workshop, which touches the basics of DSLR and photography in general, with an aim to familiarize people who are new to DSLRs, with the working of their newly acquired possession. 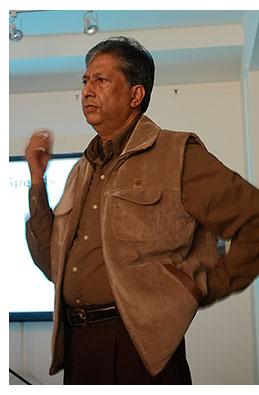 I attended the Canon Edge Go Pro Photography Workshop at the Institute of Photographic Excellence, which is located in Basant Lok, New Delhi (near PVR Priya).

While the workshop covered majority of the things I already knew, it was still decent enough and seems to be helping majority of others, who were present at the workshop. Of course there were things which I didn’t knew (eg. the usual full stop aperture and shutter numbers and a few other things), which were covered in the technical part of the workshop, which is what majority of the attendees, seemed to be most interested in.

While the actual photo taking bits i.e. composition, techniques etc. were covered in much less time, but touched at the basic level nonetheless. Of course this was the part I enjoyed the most. Add to that, one was also treated to some good photographs as point of reference during this latter part of the workshop.

Overall it was an alright experience and considering I only had to shell out cost of petrol to commute to venue and parking fee for my bike, it wasn’t really a bad deal. Though I did get the feeling that one need not be a Canon Edge member per say to attend these workshops, since Canon India has stopped issuing membership cards (as per their customer support) and there is no registered online list as such and people are free to walk in and attend the workshop.

Of course such workshops can only teach you the theory and at least in photography, it is the practical which matters the most and something which can only be attained by going out and shooting. Which is what I would be doing in the morning and as luck would have it, with only four hours or so worth of sleep!