On Sunday I got a chance to do a brief test ride of the Honda CBR 250R, which Vaibhav had bought a few days back and here is what I thought of it.

For starters, since the bike was in the run in period, I didn’t really rip it or for that matter, test out its handling, by going through a set of twisties, so will refrain from commenting on those aspects.

First off is the looks, which I guess plays an important role in people’s decision to buy a motorcycle and here the Honda CBR 250R scores a definitive plus point, even though it isn’t what I would term as pretty, but it has road presence and apart from the fugly exhaust, it will definitely attract second looks from onlookers. 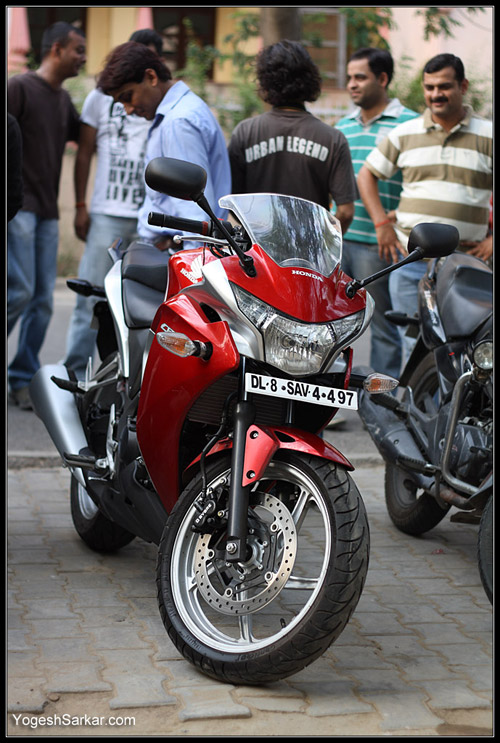 First thing that did strike me, even before Vaibhav parked his CBR 250R was the longish turning radius, which was kind of confirmed in my test ride of it as well. This is certainly going to be an issue, while navigating through busy street of a city or the narrow roads up in the hills. But then again, it is just more of a inconvenience that will require additional effort from the rider, rather than something which is likely to hamper riding aspect seriously. But it would be interesting to see, how it does on the narrow hairpin bends in the Himalayas.

Coming to the engine, it felt rougher than what I usually expect from Honda, in fact it was somewhat like Pulsars in feel! Don’t know whether it is an issue only with this particular bike or whether the tappets were loose or something, but hopefully it will smooth out over time and behave more like the Honda engines, we have all come to respect and admire for their silent operation. Of course if it doesn’t, then it is a plus point for riders like me, who love Pulsars for their snappy responsiveness.

Gear box while being smooth, also behaved like Pulsar’s, when pulling from around 2400-2500rpm in second gear and produce the similar kind of shuddery response as one gets from the earlier carbed Pulsars, once again not something I expected from the CBR 250R. Again this can be a one off incident with that particular bike and would likely get improved as the motorcycle piles on more kilometers.

Brakes are good, though the front does have a tendency to dive more under braking than other motorcycles (not as bad as the first generation Pulsar I own) and one can lock the rear easily (tyres were new, so that can be an issue). Though the last thing can also be a user related problem i.e. mine as I am more accustomed to rear drum brakes and that too with plenty of travel.

One thing I did like was the fact that bottom part of the fairing can be removed, without removing rest of the fairing and from at least the initial looks, it does seems that even the middle fairing is removable and would certainly be a good thing to do, while traveling on the rough roads and off road. Ergonomics seemed good and comfortable, though one does ends up leaning a lot towards the front in CBR’s case and essentially means carrying heavy backpacks on the back is a big no-no!

Even though the CBR 250R isn’t made for that kind of antics, but for those who love to travel on motorcycles, especially in the Himalayas, it isn’t really going to be a major issue. Though the really low exhaust can get in to trouble in case of really narrow but steep nallahs, which when coupled with the long wheelbase, would likely be a pain to negotiate.

On the tyres front, a user will likely have to change to something a little more off road friendly, if something like Spiti or Ladakh is in his/her mind, as they will be more at home than the street friendly tyres the CBR comes shod with.

Another cause of concern for tourers is the fact that the magnetic tank bags (eg. Cramster one) wouldn’t work on the Honda CBR250R and one would have to use straps, if tank bag is needed.

Headlight of the CBR is bright enough for touring duties, though the puny 13 liter fuel tank isn’t, especially considering the low mileage one would likely get from CBR250R, especially when ridden enthusiastically.

Overall its a mix bag for tourers, though for city and highway riders, it is going to be a potent machine at the price point it has been released at. 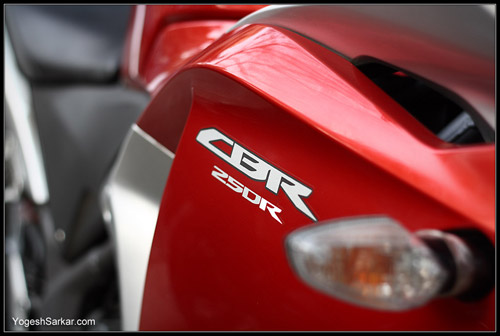