Apple iPhone 4S was launched in US yesterday. Although majority of the world was expecting Apple to introduce iPhone 5 and so was I, I can’t say I am really disappointed by the launch of iPhone 4S.

This is mostly due to Siri, the new voice controlled App which acts like a personal assistance and helps you not only search and navigate by speaking to your phone (like you do in Google Android based phones), but also replies to messages and sets up reminders. 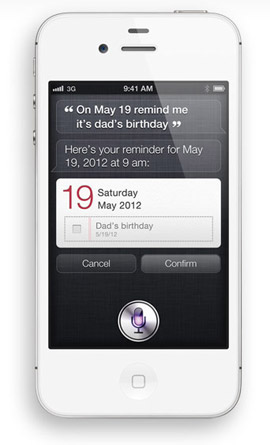 This is just the sort of thing that manages to set iPhone 4S apart from rest of the smart phones. Yes the 8 megapixel image stabilized camera shooting 1080p videos, 326ppi screen and a dual core processor is impressive to say the least, but these are the features just about any phone company can come up with.

It is at the end of the day software and user interface, which really makes a difference and a lasting impression upon a user. An area where Apple has been known to make strides and really show it’s pedigreed and iPhone 4S is no different!

So would I, a recently converted Android user, buy iPhone 4S?

Well although I am seriously worried about what all these features and extra horsepower would do to the already poor battery backup of these smart phones, I am inclined to yes and a resounding yes, if Siri can great me each morning with a “Good Morning or Welcome back Captain” voice message, when I unlock the phone for the first time! 🙂

Of course for that to happen, I will have to wait for God knows how much time, before it is officially launched in India!