Not only was the color of the Canon battery I had bought from EBay India was different, but even the lettering on it was looking like the work for a 2 year old or a drunk! A quick call to the seller, who had sold this battery to me on EBay India with “1 year Manufacturer Warranty”, quickly confirmed my suspicion, that this was indeed a fake battery and I had been duped! 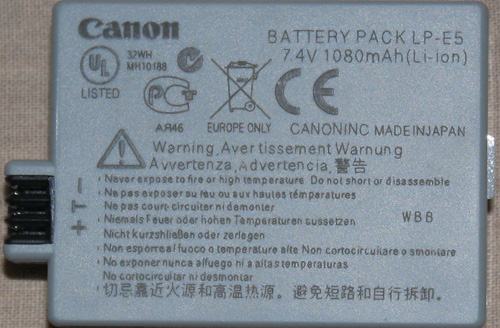 Thankfully I had bought this battery through EBay’s Paisa Pay System and have thus managed to file a dispute regarding the same and will now have to wait for over a week for them to respond to me (after they get a response from the seller) and begin the process of returning, my own money!

That is of course only if, EBay India rules in favor of me! Else my money is gone, and I would be stuck with a counterfeit Canon Battery, which let’s face it; I am never going to put in my camera or charger!

In the meanwhile, I ordered another battery from my Camera, this time from Smartshoppers.in and have received it yesterday. While it came out to be a lot more expensive than the fake one I had bought from EBay, it was sent in a lot more professionally packed package, contained the Canon import sticker as well as Canon’s Hologram. Furthermore, the difference in quality of everything, from box to the instruction paper to the battery back plate to the battery itself is night and day, when compared to the fake one I had received from EBay India. And yes, it looks exactly like the one that came with my camera!

In the end, I guess I have learnt an important and maybe, an expensive lesson here; that in case of EBay India, one is solely dependent on the truthfulness and attitude of thousands of small sellers, selling their products on it and one cannot just blindly trust them to deliver the original product!