During my recent winter trip to Ladakh, I decided to avail the web check in facility of Jet Airways, mainly because I wanted to make sure that I got a window seat and that too at the front of the plane, in order to get an unobstructed view of the Zanskar Range, as we flew to Leh.

So around 24 hours before my flight to Leh, I logged on to the Jet Airways’ website and chose the first right hand window seat for myself and printed my boarding pass. This not only ensured that I got the seat I wanted and also 250 bonus JPMiles, but also allowed me to use the special check in counter at the airport to check in my luggage and get the final boarding pass, without standing in any queue. While other passengers had anywhere from 4-5 people waiting in line in front of them and that too at 5:30 in the morning!

Unfortunately, while coming back I could not do the same, as I didn’t have access to a printer and I really did not wanted to go to a cyber café.

Once at the Jet Airways’ check in counter at Leh Airport, I was allocated middle seat in the middle of the plane. Which come to think of it, wasn’t really all that bad. Since I captured Rahul’s window seat and he had to sit in the middle and it was all foggy and cloudy anyway, so I couldn’t really take any photographs. Add to that, there was only one check in counter for Jet Airways at Leh airport, so I would have had to stand in the line, no matter what.

However, based on the great experience I had while flying to Leh, I have decided that in all my future flights, I would be using the web check in facility and hoping to witness similar if not better views and hopefully avoid standing in long queues to get my boarding pass. 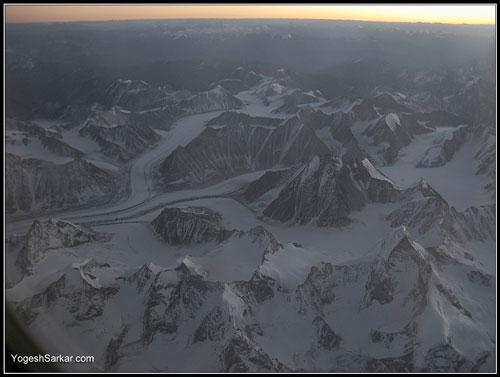