Today I went to the launch of KTM 200 Duke at the Shangri La Hotel and came back thoroughly impressed, not only by the bike itself, but once again by Bajaj Auto, which whatever the critics might say, does have a lot of business sense and knows what the market wants!

At that price, KTM 200 Duke is a bargain and would be a complete street hooligan, thanks to its relatively high power to weight ratio (184Ps/tonne) and compact frame i.e. lots of wheeling starts.

Add to this, KTM 200 Duke is a good looking bike as well and will easily manage to stand out from the crowd, especially since there isn’t anything like this right now on the Indian Streets. 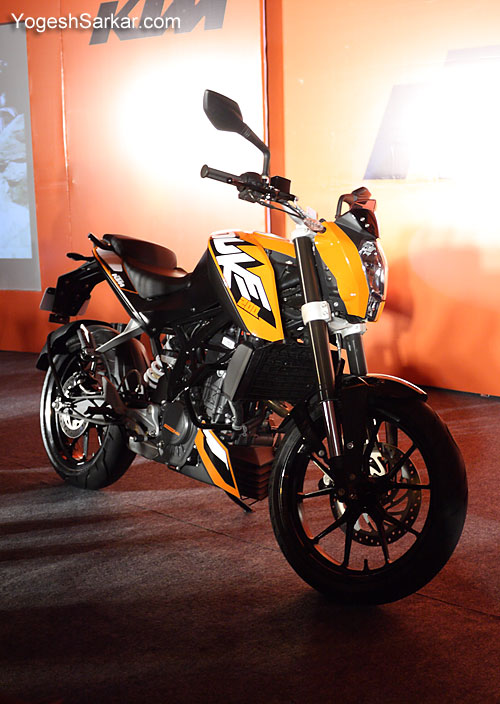 And even though it has a high revving engine, small petrol tank (11 liters) and almost no space to mount the luggage i.e. not the ideal motorcycle for touring, but I have to say, I am tempted to buy it as a second motorcycle for slicing through traffic and short weekend trips to nearby places, which will really put its trellis frame and the beefy rear tyres to some good use.

Heck if I was living in Chandigarh or somewhere closer to the hills or in hills, I would have gone ahead and booked KTM 200 Duke ASAP, since that would have allowed me to undertake day rides in the lap of the Himalayas, without any luggage or worry about the tank range and let the bike’s character really shine, without it being overloaded with luggage!

Guess its a good thing that there wasn’t a test bike available at the launch, else the temptation might have become uncontrollable! 😀