It’s been 12 days since I upgraded my desktop’s primary drive to a 120GB Corsair Force 3 SSD and that for a webpreneur like me means roughly 140 hours of computer time, most of it related to work.

When you sit in front of a computer for such a long time on regular basis, ability of the computer system to perform consistently and without fail becomes more of a necessity than a luxury. Hence when my computer’s mechanical HDD started lagging a bit and in particular system started becoming sluggish after running continuously for 4-5 hours, I knew something needed to be done.

While I had the option of dumping my almost 4 year old 2.2GHZ Core2Duo E4500 with 4GB of DDR2 RAM and investing in a i5 or i7 system, I knew the slowness for most part wasn’t due to the processor or for that matter RAM becoming a bottleneck. 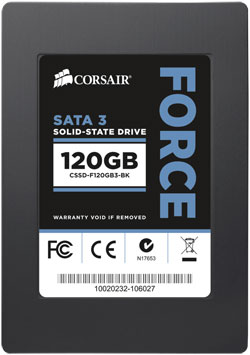 So when I came across 120GB Corsair Force 3 retailing for around 7.8k, I decided to take the plunge and ordered one for my desktop, even though I had always thought that I would end up upgrading my laptop’s HDD to an SSD first!

Once I received the SSD, I decided to reinstall everything from scratch, instead of making an image of the earlier install and copying it over to the SSD. So while Installing Windows 7 or for that matter, applications afterwards was fast but not all that blazingly fast and boot up time for most part is less than 25 seconds (after the BIOS boot) and application launch time has reduced significantly, it is not really why I had shelled out 7.8k!

The real world difference I have noticed (which matters to me) is while going through the usual work routine involving several applications running simultaneously and continuously for 12-14 hours and the system still continues to respond as swiftly as it did when it is first started!

This for me matters more than windows or applications launching a few seconds faster and ensures that the only time I have to restart the system is when windows need to install updates and I can concentrate on work, rather than wait for the start menu to displays all the application, while running a memory intensive program.

While I am sure that upgrading to a newer and faster quad core processor and 8-12GB of RAM would further boost the system performance and help me take full advantage of the SSD, fact of the matter is, my current system no longer feels slow or sluggish. So in essence, my 7.8k investment in SSD delayed the possible 40k investment I would have had to make in purchasing a newer quad core processor, motherboard and RAM!

Now I can’t wait to upgrade my laptop’s HDD to an SSD, especially since it is way slower than the HDDs on my desktop computer!