I decided to get the Tata Sky + HD installed last month, after I bought Toshiba 32PB1E LCD TV and found quality of the cable TV connection unacceptable for widescreen viewing. Additionally the lure of being able to record programs and pause live telecast was what eventually pulled me towards Tata Sky’s + HD service, along with positive experience and recommendation of fellow BCMTians.

I called Tata Sky Customer Service in morning to clear couple of doubts I had and they were promptly answered by the customer service representative and I actually ended up buying Tata Sky + HD service on the phone and paid for it through my credit card and that too in 6 interest free EMIs.

The only negative point about the whole initial experience was that HD service took 24 hours to get activated and till then I had to watch the non HD channels, which were in any case, way better in picture and sound quality than what our local cable operator could deliver! 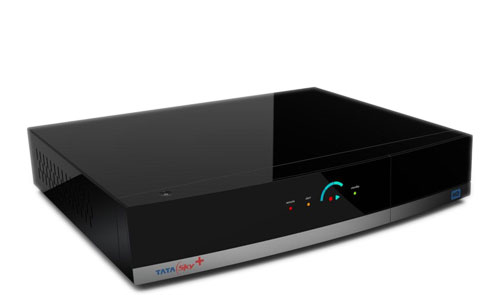 Sound and Picture Quality delivered by Tata Sky + HD has been mostly great in case of standard definition channels and superb when it comes to HD channels (1080i and 7.1 audio). And while I have not been able to test 7.1 surround sound, sound coming out of TV speakers is what I would call comparable or better than most ripped movies with good sound quality.

Stretching and upscaling of SD content done by Tata Sky + HD box is far superior than what our TV could do and thus I am letting Tata Sky + HD do all the processing and have disabled stretch feature in TV and for most part one can’t really tell, whether the content is 4:3 or 16:9, apart from a few channels like MTV (of course it isn’t anywhere close to real HD content).

A major shortcoming in case of Tata Sky is the fact that they only have 10 HD Channels at the moment, which is less than what most other DTH services provide.

Also in case of even moderate rain, satellite signal gets lost and one is forced to stare at the blank screen instead. But then again, our cable had almost daily outages without any inclement weather, so I guess it is somewhat of an improvement.

I hate the fact that one has to use remote for the set top box to change channels and also the fact that channels are spread out in hundreds of numbers (right till 800s), making it tough to browse through them, unless you make a favorite list or are ok with the idea of choosing genre while channel surfing.

Of course it would have been great, if one could at least remove the trivial channels from the channel list, but that is not really possible, unless you use Make My Pack plan and handpick channels you wish to watch (turns out to be quite an expensive proposition if you are picking HD channels).

DVR Function of Tata Sky + HD is comparatively easy to use, once you get the hang of it. However it is not without its failing, especially if you set it up to record a series. Because it ends up recording older episodes (which aren’t in its storage) if they are being telecasted again (which most Hindi Channels do). Good thing is that the DVR has plenty of space (500gb to be precise) to several month’s worth of show if the need be and even HD content does not take all that much space!

Add to that, in case of electricity failure or loss of signal, it does not attempt to record the missed part at a later time and presents you with partially recorded program. Had the set top box been intelligent enough to do that or removed the partially recorded show when it was being re-telecasted again and recorded it completely from scratch, it would been great. But I guess the designers of the DVR functions were assuming perfect weather and uninterrupted power supply when designing it and thus made no attempt to do that.

Of course the great thing is, you can record one channel and simultaneously watch another channel or record two channels while watching a previously recorded program. This does make the life easier, but if you are unlucky enough like me, you will end up with a scenario where there are two series being aired at the same time, which is liked and watched by your family and thus leaving you with no other choice but to switch off the TV, while both of them are recorded every night at 10:30PM!

There is also the cost of AMC once the 1 year warranty is over and visit charges in case of break down, that needs to factored in, but I guess we will worry about it as and when they are levied.

Overall, I am quite satisfied with the service and performance of Tata Sky + HD, in spite of some of the quirks I have already mentioned. Additionally the fact that the dish could be installed on our ground floor flat without any image quality issue (it needs to be pointed towards South East) was a boon as well and something about which I was initially apprehensive about.