While a photo shoot isn’t like an exam, it is a good idea to prepare for it in advance, especially equipment.

That way you don’t end up missing something crucial from your kit or arrive at a shoot with dead batteries.

So here are the steps I follow, before heading out for a photo shoot (I mostly shoot landscapes, cityscapes and street candid).

Test and charge camera and flash batteries: I have seen people coming back empty handed or being forced to wrap up a shoot early, because they forget to charge their camera batteries before a shoot. So make sure the battery in your camera and the backup one, have enough power to shoot at least 1.5-2x the photographs you are planning to shoot and same is also true for those who use Speedlight.

Format your memory cards: It is always a good idea to format the memory cards beforehand, so that when you arrive at the venue, you can take out the camera and start shooting, instead of wasting time deleting photographs. Setup the primary lens and body for the shoot: If you know the sort of condition you will face and know which lens you are going to use for it, then it makes sense to attach the appropriate lens to the camera body and dial in the settings you are going to use. This way you aren’t twiddling with the setting, after arriving at the location and can just start shooting. Pack your camera bag: While at times it is a good idea to take all the gear you have, however when you know for a fact that a certain lens or filter isn’t going to be used, then it makes no sense to lug that extra weight. At the same time, it is always a good idea to take gear you think, there is a slight possibility that you might end up using. Here is my Lowepro Flipside 400 AW all set for tomorrow morning, missing from the bag are my Canon 18-55IS and Canon 50 f1.8 lens and a few filters. Even though there is only a slight chance that I would actually use my Canon 430EX II Speedlight, I am carrying it nonetheless. 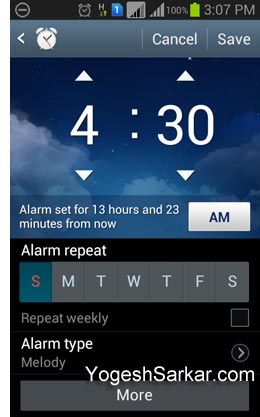 Setup Alarm: If you are planning to shoot early in the morning, then make sure to setup an alarm early enough, so that you have enough time to not only get ready, but also travel to the location at ease eg. tomorrow I am planning to shoot at 6am, so I have my alarm set for 4:30am.

Carry water and eatables: Even if you eat something before going out, it is a good idea to carry some food and water, especially if you are going to be shooting at a remote location. For in city location, carrying a water bottle is generally good enough.

Of course one also needs to research the location and route (if it is far away), before heading out, but that is generally more important when you are going out at a remote location, you haven’t been to earlier. However the most important thing to keep in mind is, unless your livelihood depends on it, photography is fun and should be enjoyed as much as possible, so go out and have fun and keep shooting :).