After having used MTNL ADSL connection for 7 years, I decided to give Reliance’s Fixed Line Broadband Connection a try, mainly enticed by their pricing (Rs. 699 a month for 2mbps unlimited connection with no FUP limit.)

While the registration process was fairly simple and fast due to their sales rep being quite enthused about selling me the connection, installation of the line took 3 days and a day later, their technician came to my home with a smallish ZTE ADSL Modem (no option for Wi-Fi router or other brands). 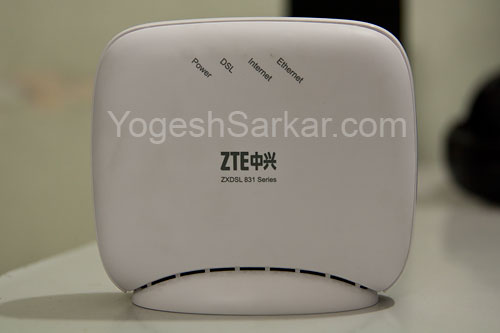 Anyways, technician connected the phone line to the modem (no phone instrument was provided) and then proceeded to plug it to the Ethernet cable connected to MTNL’s Router, in a bid to save time and effort.

Once everything was setup, Reliance’s technician proceeded to give me a tour of their login portal, which one has to use, each time they wish to connect to the internet! This seemed awkward to say the least, considering even 7 years ago, MTNL was using automatic logins through the router, rather than forcing users to open a webpage and manually type username and password to begin surfing! Even worse, even if you do not get disconnected, Reliance Communications’ login system will automatically log you out after 24hours! However, when the technician was giving me a tour of their login portal, same thing kept happening every couple of minutes.

When I finally got the chance to use the internet, I found speed to be quite slow and sure enough, Reliance’s 2mbps connection was working at a far lower speed than my 1mbps MTNL connection!

Here is a screenshot of the best speed result Reliance Broadband Connection could manage on their own hosted speedtest! 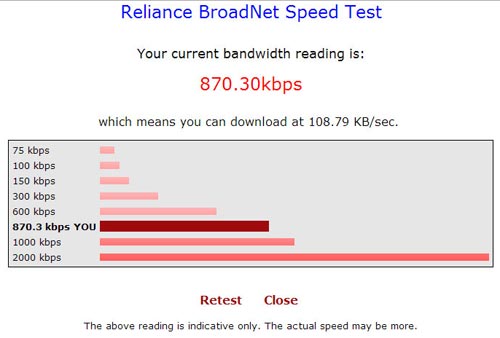 When I apprised the technician of this, he told me that this happens with newly created accounts and since it is a Saturday, he cannot get it fixed. However, by Monday morning, I should start getting full 2mbps speed!

While I didn’t believe what he had said there was little I could do at that point, already feeling regret over having bought Reliance Broadband Connection.

Even more pathetic was the fact that technician pocketed the LAN cable which came with Reliance’s Modem, when I wasn’t looking. This was something I found out later, when I decided to close the box of the modem, to put it away.

Over the course of Saturday and Sunday, I tried logging in ever so often, in hopes of finding the connection working at 2mbps, but each time I was disappointed.

Finally on Monday (6th April 2013), I called Reliance Broadband’s Customer Care, who told me this was a North-India wide issue with their network, which would hopefully get resolved by 21st of April (as of 9th May, from what I hear, it still isn’t resolved!)

After several emails and calling them out on Social Media Sites, their “Relationship Manager” finally called me on the 15th of April! After much persistence, their “Relationship Manager” finally processed the cancellation request and gave me cancellation request no. and told me that their field executive would call in a few days to collect the instrument, 7 days after the instrument is picked up, my connection would be cancelled. Afterwards I can call their billing team to request for a refund, which if due, would then be processed within 60 days (essentially saying, thank you for choosing Reliance, you are never going to get your money back!)

When I asked her to send an email, stating all of the above, she refused to do so and even refused to escalate the call, claiming she was the senior supervisor and said that in order to get an email about what she had said, I need to call their customer care with the cancellation request no. and that I am free to complain to their appellate authority if I wanted to.

I did request the same from Reliance Broadband Customer care, Reliance Communication Delhi Appellate Authority and their official reps on Twitter and Facebook, but nothing happened.

What I did get on the 27th of April 2013 was a collection call from Reliance Broadband, asking me, why I hadn’t paid my broadband bill!

When I asked for the details of the bill and told them it was a prepaid connection which was installed 21 days ago and I had requested cancellation of it 19 days ago, the person on the other end just wanted to get off the phone and so did his supervisor, without providing me any information whatsoever.

I did however get the paper bill a few days later, which as you can see below, was generated on the 27th of April 2013 for Rs. -181.93 i.e. Reliance Communication had made a collection call to me at 11:44AM about a bill they had generated on the same day and which was showing, that they owed me money! No wonder their collection agents wanted to get off the phone ASAP, when I asked them about the bill. 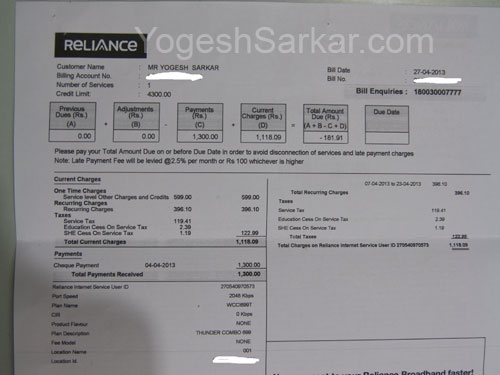 She also added that the charges for the bill they had generated on the 27th of April 2013 (account which was terminated on 23rd of April 2013), would be refunded when the new bill is generated next month for my terminated account and once that happens, they will issue me a refund within 45-60 days!

When I told her it is unacceptable that they are offering to refund only part of the amount and it is absolutely scandalous that they are planning to generate more bills for a terminated account, she had no convincing reply. Neither was Reliance Communication Social Media Team ready to provide me with a letter or email stating that my account had been cancelled, nor were they ready to provide me in writing, that I do not owe them anything and would not be billed.

Further attempts to get Reliance to respond in an appropriate manner has failed and it seems it is their intention to keep billing me for this supposedly terminated account and continue stealing my hard earned money, due to the fact that they are a large company and I am just another idiot, who fell for their too good to be true offer!

Ps. Reliance Communication Delhi Appellate Authority didn’t even bothered responding to even one of my numerous emails to them!

Update: 32 days after the cancellation request and 17 days after the supposed cancellation, Reliance Technician came to pick up the modem and wire, unannounced and gave me this piece of paper as proof for collection of the equipment (which is laughable to say the least!) 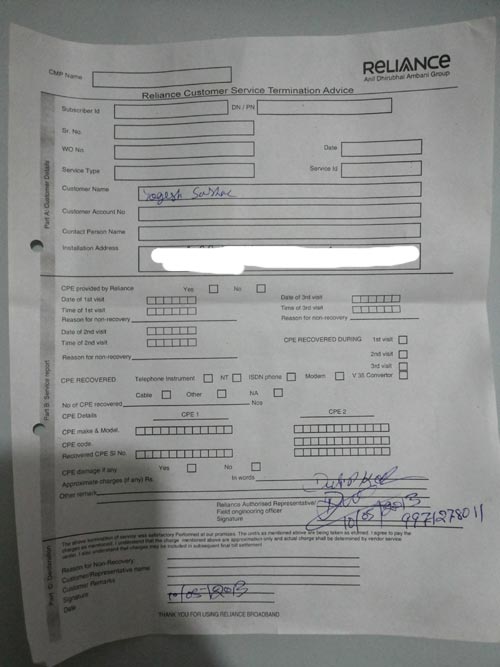 Update: Several months later, after I got my complaint routed through DOT, they finally gave me confirmation for cancellation and refunded 300 odd rupees i.e. they kept first month’s payment as well as installation charge, even though I didn’t even use it for a single day! I decided 1000 bucks wasn’t worth wasting more time with these guys and leaved the matter at that.