Manali – Leh Highway has been reopened for the 2013 travel season, with the first batch of vehicles from Manali, reaching Leh on Sunday evening (19th May 2013).

However, even though news reports from local dailies and ground reports are confirming the reopening of the Manali – Leh Highway, there is still no official word yet from the SDM Office in Manali and from the looks of it, they haven’t yet started issuing permit for Lahaul and Ladakh bound vehicles from outside Himachal. 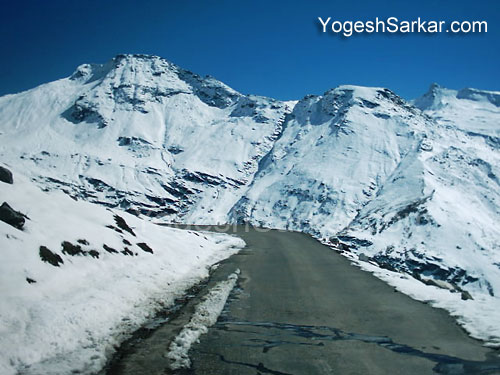 To make matters worse, SDM Office is once again doing the same flip-flop that was seen last year, with respect to two wheelers. With earlier stated line of “no permit needed for two wheelers” being replaced with “permit needed for all motorized vehicles from outside Himachal”.

In light of this and the fact that Manali – Leh Road is in a terrible state right now with plenty of snow on the road as well. Hence it would be a good idea to take the Srinagar – Leh Highway to reach Ladakh for the next week or two, till the route stabilizes somewhat and Administration comes out with clear policies, in regards to issuance of permit for Rohtang Jot.

Those who have to take the Manali – Leh Highway in the next few days are advised to try and get the permit from the SDM Office in Manali, before attempting this route, even though it is highly unlikely that those starting in the wee hours of the morning would find any check posts en route.