It seems like Information and Broadcasting Ministry of India has decided to block/censor Comedy Central for some reason and it would no long be available for viewing till 4th of June.

Here is a photograph I took of the message I received, while trying to access Comedy Central today (25th April 2013). 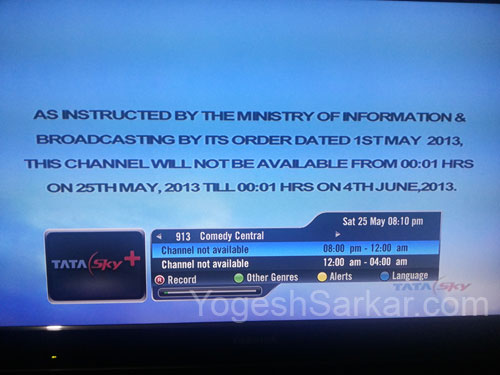 I am not quite sure why this step has been taken by the Indian Government, but I can’t seem to fathom what could be vulgar or offensive enough on a comedy channel to justify its blocking. And the funny bit is, even though the order for this was supposedly issued on 1st of May 2013, a quick Google Search reveals nothing!

In any case, I am trying to find more information about this incident and if and when I find something, I will update this blog post.

Update: here is the order from the Government of India, which has lead to blocking of Comedy Central! http://mib.nic.in/writereaddata/html_en_files/content_reg/ComedyCentral.pdf. Apparently Comedy Central has been blocked due to airing obscene scenes on its candid camera show, Popcorn TV on the 26th of May 2012. In one of the pranks showed on that day, a member of the crew with mannequin legs (which seem like legs of a woman) goes on to pretend in public like he is having sex (viewer could only see his back and legs) and at the same time, he has supposed to made some obscene remarks about women as well.

Now I for one do not watch Popcorn TV, but I find this to be a ridiculous order, when there are plenty of songs from Bollywood movies which are much more vulgar and degrading to women than something like this!