Yesterday, GREF finally managed to reopen the Manali – Kaza Highway for two wheelers, and although the route is in bad condition, it is expected to open soon for heavy vehicles. That is when the official announcement about the reopening of the route would likely be made.

2013 has been particularly bad year for Manali – Kaza Highway with many glaciers reported to be on the road itself and are melting fast, which is leading to large puddles of water being created on the road and thus making snow clearing operations difficult. 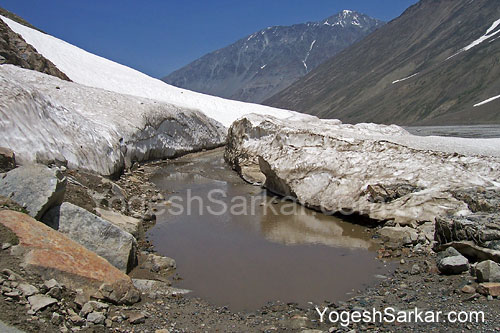 While Manali – Kaza route has always been in bad condition, thanks to the above scenario, it is in an even worse situation right now and might just get closed for a few days, before reopening again. Hence all those planning to take this route are advised to go a little later in the month or begin their journey from Shimla side to ensure that GREF has at least a few days to stabilize this route.

Having said that, I really hope that Himachal Government along with GREF takes concrete steps to improve the condition of Losar – Gramphoo stretch, which would not only result in smoother ride for travelers, but also should make the road clearance work easier next year.

Till then of course, it is going to be a beloved stretch for all those who love off roads.