As an Indian Citizen and someone who loves traveling to Ladakh, I am disheartened to hear of repeated Chinese transgressions into Ladakh and what appears to be, Indian Government and Army’s inability or unwillingness to keep these in check.

Latest incident has happened on the 11th July 2013, when two Chinese helicopters violated Indian Airspace in Chummur sector (source). Once again the army is downplaying the whole incident and in a way, giving credence to Chinese claim over the Indian Territory and giving rise to the notion in the international community that LAC (Line of Actual Control) is vaguely defined and hence these are just “confusions”!

While Indian Government and the Army might be right in avoiding skirmishes and escalation along the LAC, at the end of the day, however barren or remote the place may be, it is still a part of India and Indians do live there and depend on that land for their livelihood.

Yaks grazing near the LAC 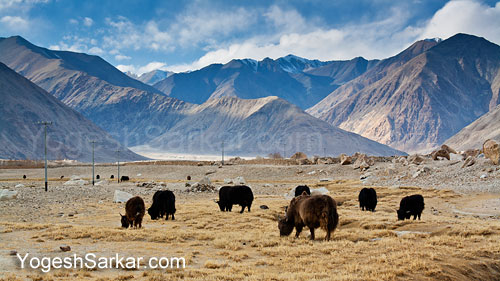 And it is those Indian Citizens, who are often at the receiving end of threats from PLA soldiers and are becoming somewhat disillusioned with India, thanks to our indifference towards their plight and lack of development.

A possible and peaceful solution worth exploring is the opening up of these areas for tourism, for both Indian and foreign tourists. This will not only strengthen India’s claim over these supposedly disputed territories, but also provide an alternate and viable source of livelihood for the locals, promoting not only cross cultural interaction between Indians, but also making them feel like a part of this vast and diverse country, rather than individuals caught between the tussles of two Asian Superpowers.

Of course the Indian Government on its part would not only need to push for more infrastructure development in these areas, but also provide adequate security for the tourists as well as tourist establishments, in order for the tourists to feel safe in visiting these areas.

This is something that I along with majority of hardcore travelers in India, have been strong advocates of for quite some time, even though most of us have already visited some of these areas along the LAC and witnessed firsthand, how beautiful these areas truly are. A feeling you will likely share, if and when you get a chance to explore these wonderful places.