I recently ordered Micromax Canvas HD A116 dual SIM smartphone for my sister and it was delivered to us yesterday. I already own a Samsung Galaxy Grand Duos, which in many ways is like the Canvas HD and competes with it for market share.

So I was quite interested in seeing how the Canvas HD would stack up, against my Galaxy Grand and while it is still too early to draw conclusions and post a full review, here is my initial impression of Micromax Canvas HD A116. 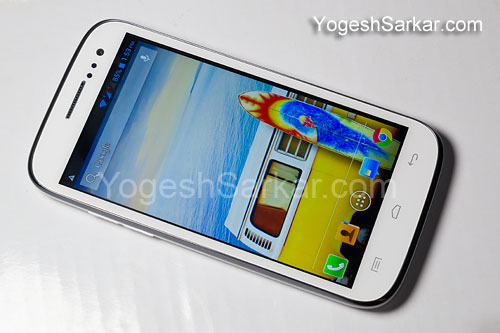 Canvas HD, just like Galaxy Grand, came with a free flip cover in the box (Micromax calls it snap cover) and normal style black hands free kit, which kind of looks odd with a white handset and isn’t in your ear type (which I prefer).

In hand, Canvas HD feels a lot lighter than the Galaxy Grand and at the same time, feels a little cheap due to the material used to build the back cover. However, that is off set by a lovely 720p screen, as soon as you turn it on. Next thing that strikes you is the fluidity and responsiveness of Android 4.2.1 running on Canvas HD, which now comes preinstalled on the phone and is mostly stock. Even though I am not really a fan of stock Android, but in its latest iteration, it isn’t all that bad and fluidity almost makes up for the lack of niceties present on TouchWiz and Sense UI. In fact it is heartening to see Micromax not only offering firmware updates for its phones, but also shipping the new ones with the latest firmware preinstalled.

Micromax Canvas HD does heat up a little while running benchmarks or games, but not enough to be a deal beaker or a real bother. Voice quality is alright as well, though I did notice slight cracking of voice on couple of occasions and I am not sure whether it was due to network issue or the mobile phone at the other end. At the moment I would give it a benefit of doubt and report back with final conclusion, after a few more days of usage.

While I do not subscribe to the idea of judging a smartphone by synthetic benchmarks, I did run Quadrant Standard and got 4032 in it. Just for the sake of reference, my Galaxy Grand manages to clock in 3607 points with its latest 4.1.2 firmware. 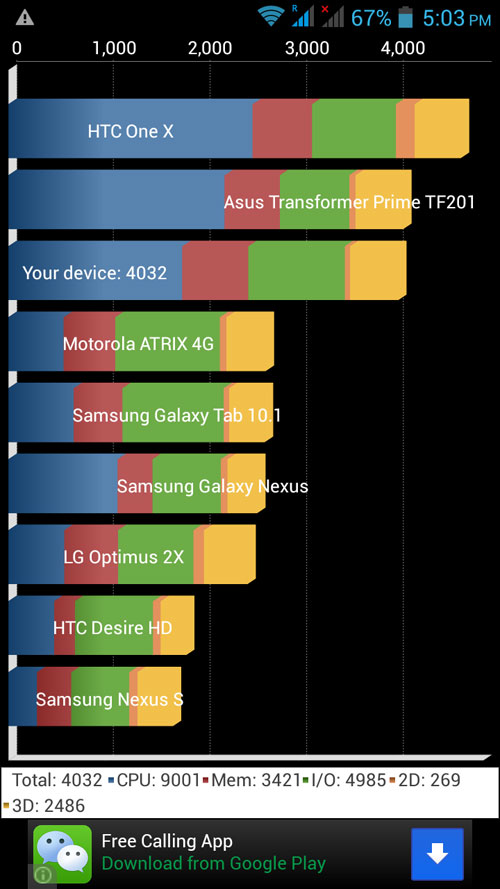 While Canvas HD runs games like Temple Run with ease (I don’t play many games on phone), running it in best quality mode, does slow down the device and there is a noticeable drop in frame rate. But then again, majority of people play in stock settings, where the Canvas HD performs quite well.

Overall, I feel Micromax Canvas HD is quite a nice smartphone and well worth its price, even though it does not have the same refined UI or build quality as phones from Samsung, HTC, Sony etc. which cost quite a bit more.