After using aftershaves from the likes of Old Spice, Park Avenue, Denim etc. I decided to give Nivea Replenishing Post Shave Balm a try this time around, since I usually end up with dry skin after a shave, especially in winters and I don’t like to apply moisturizing creams, right after applying aftershave. 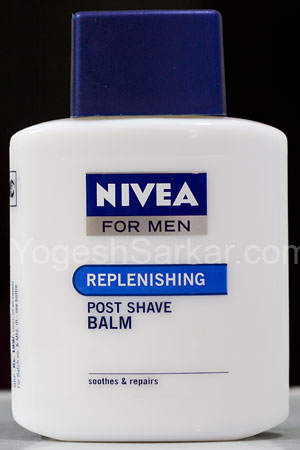 Nivea claims its Replenishing Post Shave Balm “protects skin from irritations and inflammation, absorbs instantly with no greasy residue, soothes and conditions skin and provides smooth and supple skin” and from my experience, for most part this description is accurate.

This aftershave balm from Nivea does not sting and at the same time, moisturizes skin. Though you have to be careful with the amount you are applying, since only a small, couple of pea sized quantity of this balm is enough for shaved area and more quantity leads to the skin feeling greasy, especially when you sweat. And at least in Delhi’s current weather (30-35 degree Celsius maximum temperature), greasy feeling isn’t a major worry, if you apply just the right amount and hopefully this will also be the case in peak summer as well. Though it is the winters, where it would likely be most beneficial in keeping the skin moisturized.

Another thing I like about this balm is the fact that it has a very light fragrance, which does not end up overpowering your light perfume/deodorant, like most other aftershave lotions.

Overall I am quite satisfied with Nivea’s Replenishing Post Shave Balm and the fact that it doesn’t cost whole lot more than normal aftershave lotions is an icing on the cake (got it for Rs. 174 for 100ml).