For past few years, I have been using Sony’s Cycle Energy Multi-Use Premium AA Batteries (2100mAh) for my cameras, flash and even wireless mouse. 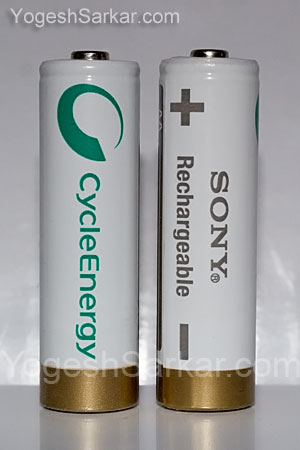 Reason why I chose to pay premium and buy Sony’s Cycle Energy batteries is due to the fact that these batteries are advertised as Pre-Charged ready to use batteries, that can hold their charge for as long as 1 year i.e. similar to Sanyo Eneloop. While in case of a wireless mouse, this really isn’t a feature that is needed, when it comes to powering external flash (which I do not use that often) or being used as backup in the battery grip of my Canon DSLR, such long shelf life is a blessing.

And thankfully, Sony’s Cycle Energy Batteries perform as advertised and manage to hold their charge for several months (never really left them for a year without usage). In fact I had initially bought 2 of these in 2009, along with Sony Battery Charger, after I had a rather disappointing experience with Uniross Hybrio and in December 2011, I bought another 6 for my DSLR’s Battery Grip and surprisingly enough, all 8 are still working and in regular use.

Since these are 2100mAh batteries, they usually have enough life in them to allow you to shoot several hundred photographs with your digital camera, before losing their steam. In case of a flash, they are pretty good as well, though I guess professionals would prefer to use something with a little more power eg. 2700mAh normal NIMH batteries, which do not hold their charge for several months, but they can help you get several extra shots at an event.

Of course for my use, these are just perfect and the fact that these can be bought from Sony World (which is where I bought the initial pair) just reinforces your belief that you are getting genuine stuff (even if you end up paying MRP), rather than counterfeit batteries being sold at some of the stores.

Overall I am quiet satisfied with Sony’s Cycle Energy Batteries and would likely be buying more of these, if and when I need them.