This is a long term review and comparison of Micromax Canvas HD A116 with Samsung Galaxy Grand Duos, both of them are running latest Android 4.2 firmwares at the time of this review.

I have been using Samsung Galaxy Grand Duos since February this year, and bought Micromax Canvas HD for my sister, couple of months ago. Since then, I have had the opportunity to see how these mobile phones stack up against each other in real life, beyond all the synthetic benchmarks and short usage experience. 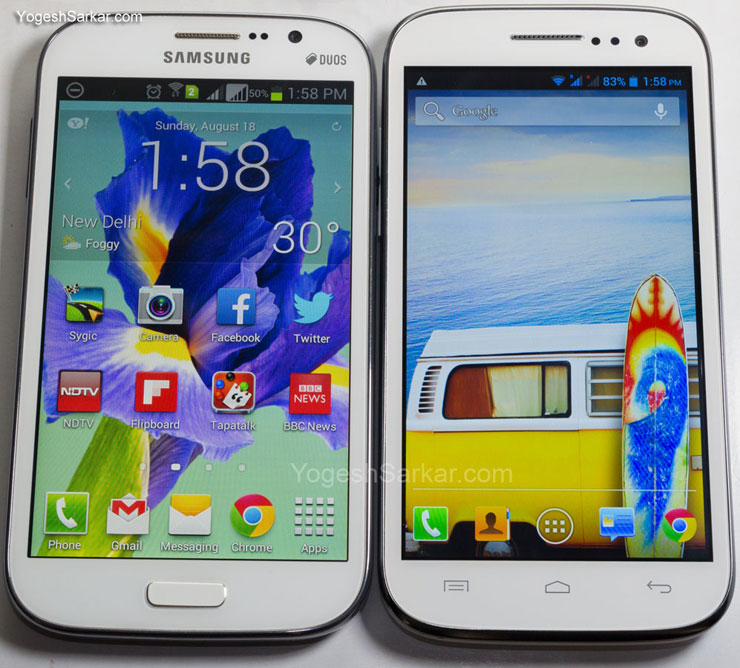 Build Quality:As far as build quality goes, Samsung Galaxy Grand is the clear winner. Its build quality is superb, even though it is made of plastic. Micromax Canvas HD on the other hand, feels cheap. Even though Canvas HD isn’t fragile, it just doesn’t feels like a mobile phone worth Rs. 14,000.

Screen: Both these phones have 5” display; however Galaxy Grand’s screen is wider, while Canvas HD’s screen is slightly longer but narrower. While Canvas HD features a higher resolution display than Galaxy Grand, quality of screen isn’t nearly as great and for long duration, Grand is easier on the eyes. Add to that, Canvas HD’s screen has a noticeable blue tint, which becomes quite apparent when browser or any other app with white background is open and both the phones are placed side by side. Having said that, color reproduction in neither of the screens is accurate and viewing angles on both the phones is similar. 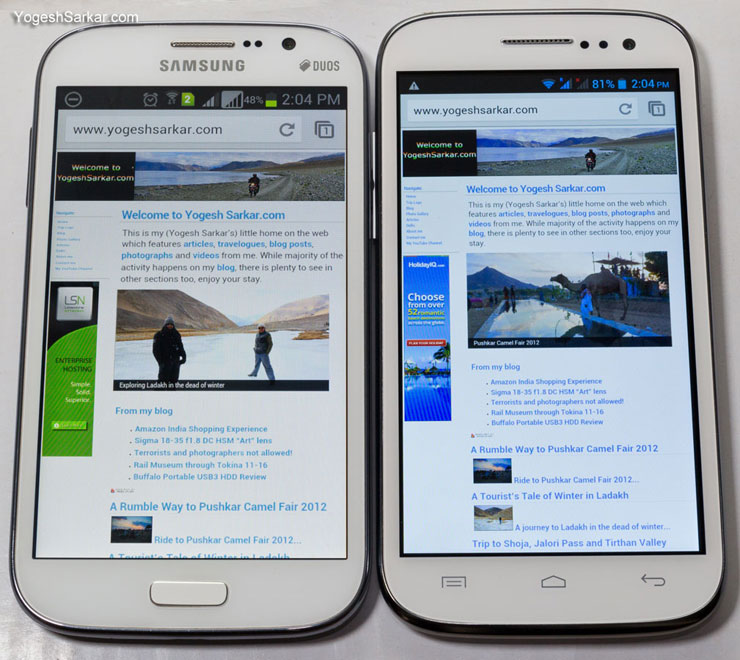 Speaker and call quality: Speaker on the Galaxy Grand is louder and seems to produce better sound, however as far as call quality goes, both mobile phones are similar.

Camera: Image as well as video quality of Samsung Grand is better than Micromax Canvas HD, even though both feature 8 megapixel sensors, capable of shooting 1080p videos. Additionally, Canvas HD while shooting HD videos, seems to store them initially in its internal memory and hence switches over to normal quality after few minutes, due to lack of space available, even though memory card has plenty of space left!

Ease of usage and usability: When I got hold of Micromax Canvas HD, I was pleasantly surprised by ease of use of stock android 4.2. However, Samsung’s TouchWiz is better and the fact that you can enable/disable several settings and adjust screen brightness from the notification area is a real boon and something I feel, Google should add in stock Android. Add to this, features like blocking mode or even the custom task manager make Galaxy Grand seem more feature rich and easy to use, out of the box. However all these features also take a toll on its performance and make Grand sluggish at times, which is a big usability issue. 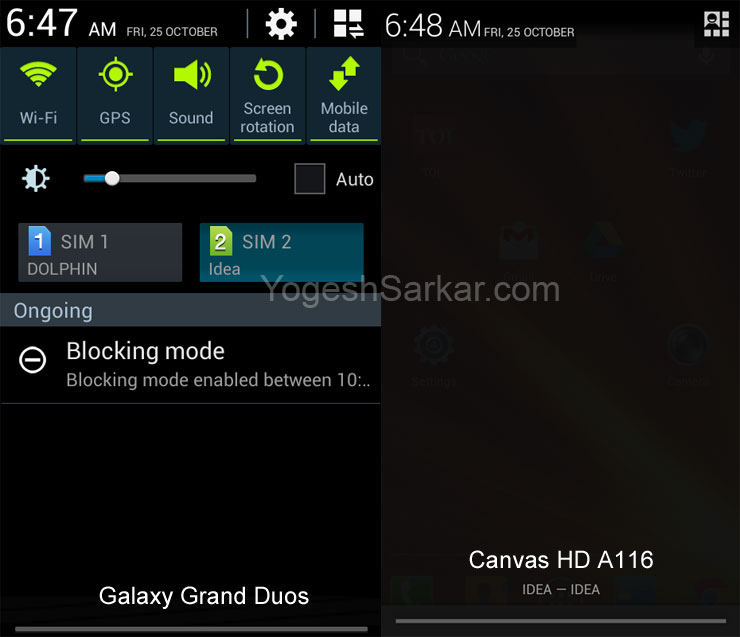 Performance: Thanks to its quad core 1.2ghz processor and stock android, Micromax Canvas HD more than makes up for all the deficiencies listed above with its fluidity. In fact, it rarely feels sluggish, which is a regular affair in case of Galaxy Grand and one that annoys me to no end! While recent updates have somewhat alleviated this issue, Galaxy Grand still feels slower than Canvas HD, even while browsing through home screen or application list. Due to this, Canvas HD emerges as the clear winner, as far as performance and fluidity is concerned.

At the end of the day, even though I love my Samsung Galaxy Grand Duos and can’t live without things like blocking mode or quick access to settings in notification area, I feel let down by Samsung when it comes to performance and fluidity. After all, 1.2GHZ dual core processor isn’t really all that slow and shouldn’t feel as slow as Grand does at times.

Micromax Canvas HD A116 on the other hand has pleasantly surprised me and even though it seems like a cheap phone due to material used, it is great performance and usability wise and would likely be my choice, if I had to choose all over again!