With the Auto Expo just around the corner, I needed to get my Tamron 17-50 f2.8 back on duty (it had been infested with fungus).

Even though my lens is still under warranty, Tamron India wanted me to pay to get the lens cleaned. They would have also kept the lens for at least one week! So I decided to take it to Pritam Studio in Chandni Chowk and get it repaired from there.

Since finding safe parking at Chandni Chowk is difficult, I decided to take the metro instead. It has been several years, since I last took the metro, because I hate using public transport inside city.

Thankfully, metro wasn’t that crowded today. And even though at Rajiv Chowk, I was greeted by a sea of humanity, I swiftly managed to leave it behind in a not too crowded metro to Chandni Chowk. As I walked past parking lot at Chandni Chowk and saw scores of cars waiting outside to get an entry, I started feeling proud at my decision of not bringing my bike here.

Soon I was at Pritam Studio. Showed him the lens, and was told to pick it up on Monday. Now there was no way I was going to ride the metro again, so told him, no way, fix it today if possible. Thankfully, he agreed and asked me to come back couple of hours later.

Now I was in a fix. I was alone and had no other work in Chandni Chowk. To top it all, even though I had my Canon 1000D with me, I hadn’t brought any other lens!

I saw McDonalds across the street and thought of having lunch. With MTNL 3G network failing to work once again, I managed to finish my Rs. 95 meal in less than 20 minutes, despite deliberately eating slowly!

I decided to head towards Red Fort, with an aim to photograph it with my phone’s camera. Since I had a DSLR body in my backpack and no lens, I was quite sure I wasn’t going to make it past security. So I took a snap from across the barriers, and headed back. 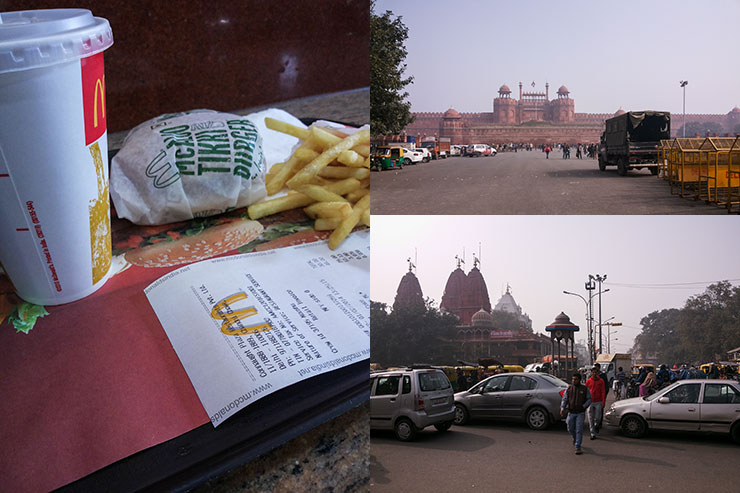 What I did in 25 minutes

After almost reaching camera market, I thought of doing some shopping, as cheap as possible. So I started looking for flash gels. Sadly even after scouring almost every shop in camera market, I couldn’t find the gels I want and the ones I did find weren’t that great.

Since I had managed to spend almost one and a half hour, I decided to head to Pritam Studio and try my luck. Sadly, lens wasn’t ready yet, and I was told to wait for another half an hour.

By now I was almost out of ideas, so I decided to call a friend, well two. Salil and Rajiv were at the receiving end of my call and thanks to the duo, next forty minutes just flew by.

By the time I returned to the shop, my lens was receiving the final touches, in one of the dustiest workstation I have ever seen! But at the end of it all, lens was clean (surprisingly) and seemed to work fine as well.

Happy with relatively inexpensive bill, I headed to the famous Jalebi Wallah and got some delicious jalebis and rabri packed for home.

By the time I reached Chandni Chowk Metro Station, I was greeted by a large crowd. To make matters worse, all the ticket counters were closed! So I had to climb all the way out to the other side (nearly three stories) to get the token!

After a lot of jostling, I went past the security check and boarded the metro to Rajiv Chowk. Where another sea of humanity was waiting for me and even though I got the metro easily enough and it wasn’t all that packed. For some reason, it was stopped at Ramakrishna Marg station for over 10 minutes.

By the time I reached Tagore Garden Metro Station, I was exhausted.

Worst still, when I went to the parking lot, I encountered a big scratch on the side of my bike’s petrol tank.

Now I was kicking myself for taking the damn metro and remembering why I don’t rely on the godforsaken public transport system, when it comes to traveling within the city!

On the plus side, I can now finally start using my lens again, had delicious food and got to write this stupid blogpost to waste yours and my time :P.