I have been using Android smartphones and tablets for over couple of years. However it seems like my love affair with Android is coming to an end. 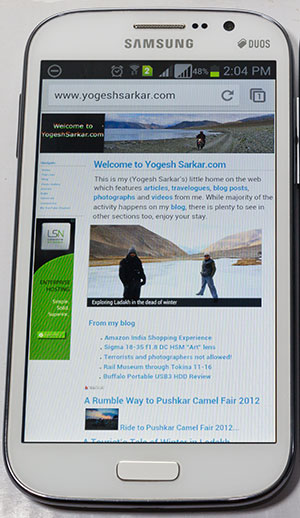 I guess most of the blame for this feeling goes to Samsung, who has managed to screw up Galaxy Grand Duos firmware so much that I was forced to downgrade to 4.1.2 (I was earlier using 4.2.2). I even went to the extent of rooting the phone, in order to remove some of the bloatware and control the CPU speed. While these have helped somewhat, I still experience unexpected lag from time to time.

I guess one way to remedy this is to install a custom ROM (there is finally dual SIM support in custom ROMs) or stopping short of it, and installing custom kernel instead.

However the real question is, do I need to be a tech geek in order to run an Android phone without lag?

And do I really need to waste so much of my time, effort and bandwidth into something, which ought to work, straight out of the box?

After all it isn’t like Rs. 20,000 (US$ 335) for a phone is a small amount, especially considering that it is an extremely depreciating asset. And if Samsung and Google still can’t manage to provide a stutter free experience at that price point, then they really shouldn’t be selling these phones to people like me, who expect a phone to work, without need of constant tinkering and tweaking!

Now some might say that this is just a problem with Samsung, and stock Android is fantastic. Well I own a Google Nexus 7 and it too experiences app crashes and funnily enough, it is Google’s YouTube App, which crashes the most!

Then there are the constant App updates I wrote about recently (click here to read). Once again these are an annoyance, especially since it is Google, Facebook and Twitter who update their Apps the most. Even though one would expect their apps to be mature and stable enough to not warrant constant updates!

I guess the time is getting nearer, and one day I am just going to raise my hand and say, I give up and end up ordering couple of non-Android phone and get rid of the travesty that is Android! Till then, I must endure…