Around a month ago, we (BCMTouring) had teamed up with Fresh Monk to sell our official t-shirts. I am writing this review of Fresh Monk, both from the perspective of a community leader who had engaged their services to sell the t-shirts and also as an end consumer of the t-shirt itself (since I bought one too).

Ever since I launched BCMTouring 8 years ago, I have been searching for apparel partners we could team up with to sell our official apparel online. Because even though I am a full time blogger and forum admin, I neither have the resources nor the will to deal with logistics and taxation headaches, by directly selling apparel online to customers across India.

And this is where Fresh Monk came in.

I initially came to know about them, when I saw Shashank Aggarwal from Eatlo running a campaign with them. I became curious about Fresh Monk and immediately called Shashank to find out more and hear his experience.

After hearing rave review from Shashank, I got in touch with Prashant from Fresh Monk, who was not only helpful enough to explain the complete procedure and workings of Fresh Monk, but was also constantly in touch with me before, during and after the launch of our campaign.

Essentially Fresh Monk works in the same manner as crowdsourcing. So when you launch a campaign, you have to set a minimum number of t-shirts you plan to sell (there is no upper limit) along with the number of days for which the campaign would be active. 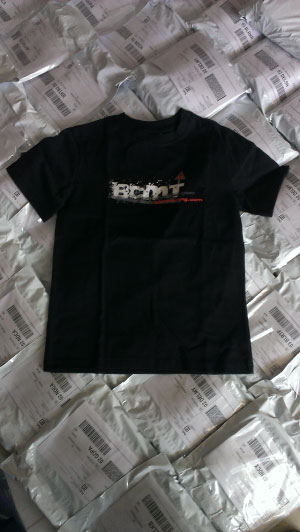 If you are able to meet or exceed your minimum target during the course of your campaign, your t-shirts will be printed and shipped to you or directly to end customers (based on the option you chose).

Until the end of campaign, money is put in an escrow account, so in case you fail to achieve minimum target and thus t-shirts aren’t printed, all those who have paid for them, will be refunded their money and neither you nor end-customer incurs any loss.

We started with a minimum target of 25 t-shirts and ran the campaign for 5 days. By the end of first day itself, we had managed to exceed the target and eventually managed to sell 149 t-shirts. All of these t-shirts were then printed and delivered to BCMTians across India by Fresh Monk, and apart from couple of slow deliveries (FedEx needs to be blamed for that), pretty much everyone had a positive experience.

Similarly t-shirts themselves were of really nice quality and I haven’t received a single complaint regarding them. And having worn the t-shirt myself, I have to say, I am pretty impressed by its quality as well.

During the course of campaign, I kept receiving constant updates from Fresh Monk and when any concern came in from a user eg. payment related issues, international delivery inquiry etc., it was promptly addressed by their customer support.

Another great thing about Fresh Monk is that they help you generate revenue by giving you a part of profit from the sale of t-shirt. How much you make per t-shirt depends on the minimum target you have set, number of colors to be printed on the t-shirt and whether they will be shipped to individuals or as a bulk package to you.

Fresh Monk has also recently launched their design tool, which helps automate campaign creation process. This was something that was missing when I had launched the campaign in April, so I had to get it done manually by contacting Prashant through phone and email. The things I had to relay through email can now be done instantaneously online. Which I feel is a great feature, though not something I missed sorely, thanks to fantastic support by Fresh Monk.

Overall, I am quite happy with my experience with Fresh Monk and would likely use them again for another campaign in a month or two. And can’t help but recommend them to others, who too are looking sell their official tees online, without getting into the hassle of logistics and taxation.