Choosing the right plan for me

Last time around I had canceled Airtel connection because they were unable to deliver 8mbps international bandwidth (you can read about it here). This time I decided to save myself headache and money by opting for 4mbps plan with 80 GB FUP limit. After 80 GB limit is reached, speed is downgraded to 512kbps, till next billing cycle. Thankfully, so far I have managed to remain under this limit.

Last time I made the mistake of booking connection through Airtel customer care and hence didn’t get their online offer. This time around, I made no such mistakes and got Rs. 500 cash back in first bill and I also got a free Binatone Wi-Fi modem, provided I keep the connection for 1 year, else Airtel will take it back at the time of cancellation. 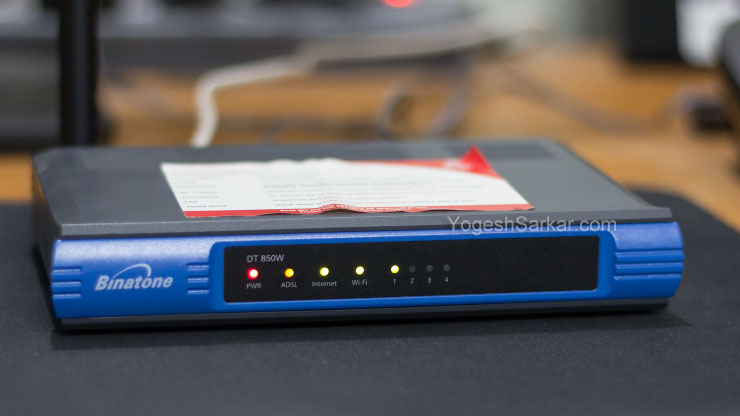 I had booked the connection online on 15th of April and after Airtel’s rep collected my documents from home; my connection was finally installed on the 19th. Installation for most part was pretty easy for these guys, since they hadn’t removed wire last time around, so they just needed to activate it and install modem. Thankfully all went smoothly this time around and soon I was online with my new connection.

Connectivity for most part is good and I am getting 4mbps promised download speed, even with international servers. Upload speed is capped at 0.5mbps, which is a big pain while uploading large files.

One thing I noticed while using Airtel’s DNS servers was that if I was accessing a website for the first time and it wasn’t a popular website in India, I would get a website not found error and if I refreshed the page, it would load without any issue. So I have switched to Google DNS servers and this issue has completely disappeared. Downside is, Google DNS servers are a bit slow in comparison and also lead to slightly slower paths being chosen for connectivity with the site.

For most part my connection is running 24×7 these days and there is no noticeable loss of connectivity. In fact thanks to this stable connection, I was recently able to upload 950mb file to YouTube and while I had to keep the upload running for several hours, it succeeded without any errors.

I haven’t really contacted Customer Service for any issue, barring a recent one where I am unable to log into my account on Airtel.in. Due to that, I was having a hard time paying my bill, which I finally paid as guest (thankfully that option worked), instead after logging into my account.

Initially I contacted Airtel Presence’s Twitter account and as per requested by them, I sent a DM with screenshot of error and also my contact details. That was on Saturday, today is Wednesday and I haven’t yet heard back from them.

I even filled out a complaint form on Airtel’s website yesterday evening and once again, so far I haven’t received any replies, apart from an automated acknowledgment mail, stating they will get back to me within 4 working hours.

So based solely on this experience, I would have to rate Airtel’s Customer Service as extremely poor. Hopefully their technical support is better than this, if not, I dread to imagine the pain I would go through, if there was an issue with my connection!

Overall I am quite happy and satisfied with my Airtel Broadband Connection, even though I am paying twice as much as I was paying earlier to MTNL and now I have to live with FUP limit as well. However, my recent bad experience with Airtel’s Customer Support has shaken my belief somewhat and I am not as sure about them now, as I was before this incident. Hopefully this is a one off case, but if it isn’t, I might end up changing my review somewhere down the line. Till then, I am going to enjoy that 4mbps speed.