On Saturday I attended Football Madness Party at Striker Pub in Gurgaon, which was organised by Microsoft India (Nokia India.)

Even though I am not a football fan and haven’t played or watched it since I was in my teens, it was quite fun to watch FIFA World Cup match between Brazil and Chile in a charged atmosphere, filled with fans of both the teams.

Initially I quite enjoyed the game, however after half time, game sort of turned into a damp squid, with Brazil (team I was supporting in this match) dragging its feet and showing little to no aggression on the field. 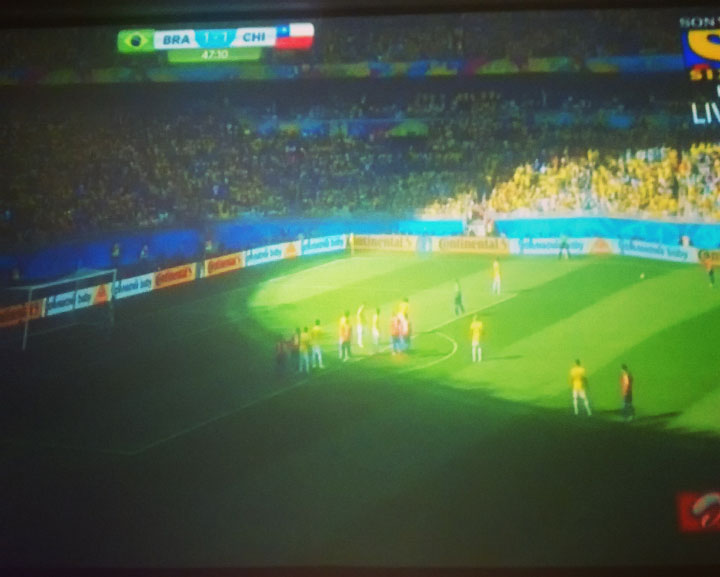 Even extra time didn’t produce any goals and Brazilians appeared unergetic and least interested in scoring goals. In fact both the goals of the match were scored by Chileans, though one of them went into their own goalpost and hence Brazil also got one point on the scoreboard. Had this not happened, match would have ended in 90 minutes. Instead, it dragged on for 2 hours and even after that, it was the penalty kicks, which finally produced winner.

In the end it was the Brazilian goalkeeper who was the savior of the day and lead Brazil to a victory they didn’t deserve (based on their body language on field).

While die hard Brazilian fans began their celebration at the end of match, there was a slight disappointment in the air. But at the end of the day, a victory is a victory and this will help Brazil proceed further in World Cup. Though for their own sake, I seriously hope they pull up their socks and start playing with heart, else they might not get this lucky each time.

Overall, it was quite fun being part of football madness and I am thankful to Microsoft Mobile India for inviting me to the party.