I have been itching to shoot a time-lapse for past couple of years, however without a proper camera timer; I had been unable to do so, till now. However all that changed couple of week back, when the timer I had ordered from Ebay.com, was finally delivered to me.

Since shooting time-lapse involves keeping the camera very still for a long duration i.e. placing it on a tripod, I had little option but to return to one of my favorite shooting place, Lodi Gardens.

I arrived at Lodi Gardens before sunrise and setup my camera behind Bada Gumbad Mosque and here was the result I got from shooting 378 photos in around 32 minutes (5 second interval).

Breaking down the shoot

Now that you have seen the first time-lapse clip I ever shot, here is a breakdown of the shoot.

Camera was setup to shoot in Aperture Priority Mode (evaluative metering), with Auto ISO. Because exposure during the course of shoot was going to change dramatically and I didn’t wanted to guess or tweak exposure mid-way. First image was produced at 1/5, f8 and ISO3200, while the last image was produced at 1/30, f8 and ISO640 i.e. a difference of around 6 stops during the course of 32 minutes!

I also had the lens on manual focus; otherwise camera would have tried to refocus before each frame, causing focus plane issue in the final image. I was also shooting M-RAW (medium resolution RAW), which gave me the flexibility and dynamic range of RAW file, while maintain smaller file size.

Timer was set to shoot at 5 second interval i.e. it shot one image every 5 seconds.

Once I had all the photos from the shoot in place, I sorted them into sub folders, each denoting separate time-lapse I had shot.

Then I used Lightroom 5.6 to process the first image from the sequence, applying contrast, saturation, GND filter, sharpening and lens correction (the usual stuff that I do while post processing any image) and I also cropped the image into 16:9 aspect ratio.

Then I right clicked the image, navigated to Develop Settings – Copy Settings and chose to copy all settings. 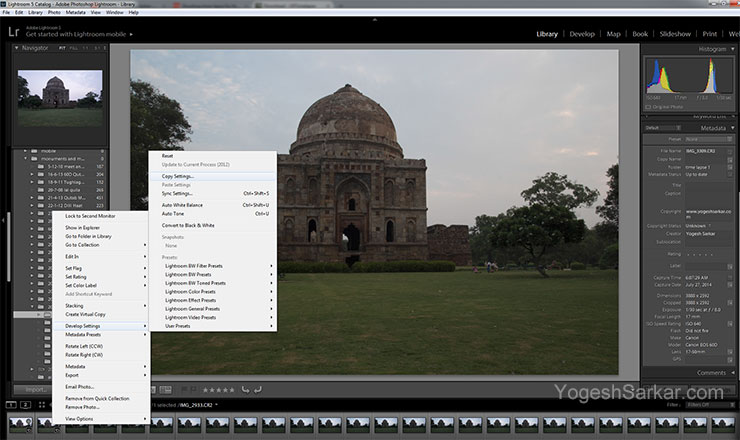 Once my images were ready to be exported out to a video, I used LRTimelaps’s free time-lapse template (can be downloaded from here and install instructions are here) to export the video. Before exporting the video, I added my copyright mark and a small audio clip (there is an option to add it on the right hand side of slideshow window).

While my first attempt was far from a resounding success with plenty of flickering, bad sky and other technical errors, this shoot helped me learn quite a few things about shooting time-lapse.

At the end of the day, I loved shooting time-lapse, even though result wasn’t as good as I would have hoped it to be. On the plus side, the traffic sequence I shot later turned out much better.