For my upcoming trip to Ladakh, I had been looking for a portable photo backup system, which wouldn’t take up too much space. While on my earlier trips I had used cyber cafes or carried my own laptop to backup photos on the go, this no longer appears all the feasible for me, because:

1. Cyber cafes often have viruses.
2. Carrying a laptop along with a lot of photo gear is a big hassle and my photo gear alone is heavier than most airline’s cabin luggage limit.

With this in mind, I set out to assemble a system which was not only small and easy to carry, but also easily expandable, based on future storage needs. And here is what I came up with: 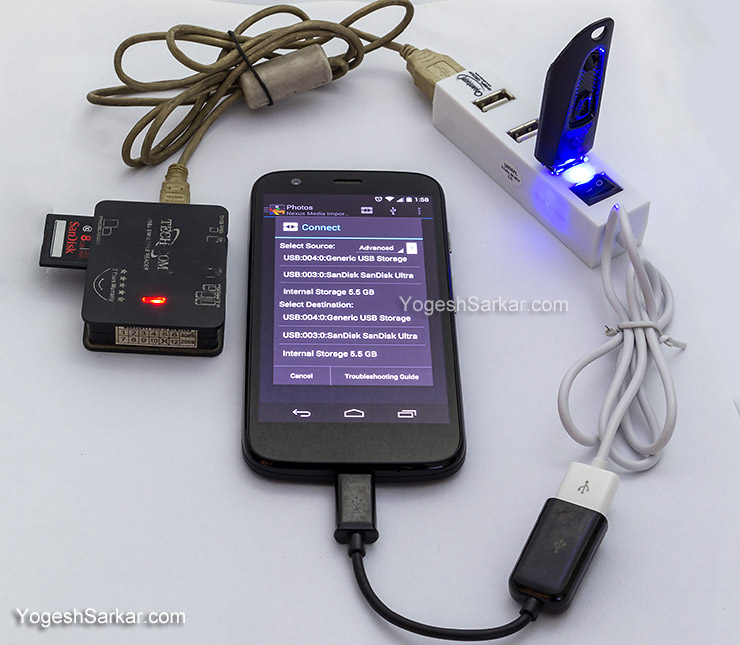 1. Moto G smartphone (just about any smartphone or tablet with USB Hub capability would do).
2. USB OTG Cable.
3. USB Hub.
4. Card Reader.
5. 64GB Pen Drive.
6. Nexus Media Importer (you can see it running on the screen.)

Nexus Media Importer not only recognizes memory card and pen drive at the same time (as you can see from the above photo), it also lets me directly copy data from one source to another i.e. I can easily copy/move multiple files from memory card to pen drive, thus not requiring any additional storage space on my mobile phone. 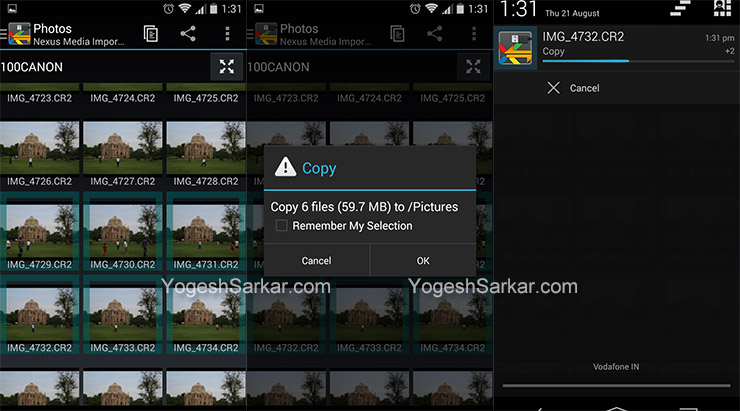 This means, apart from my smartphone (which I was going to carry anyways), I just have to carry card reader, OTG cable, USB hub and pen drive/s with me to Ladakh, in order to use this portable photo backup system. Since there are no moving parts in this setup, it can be safely used at just about any altitude.

The entire setup you see above (with the exception of smart phone and card reader), cost me Rs. 2,181 and that includes a fairly fast 64GB USB 3 pen drive and software license of Nexus Media Importer!

If you want to add more storage to the above setup, you just need to buy another pen drive. In case something breaks or stops working, you can easily replace the non-functional part, since all these components are available in most cities (including Leh)!

If you want to make this system even more compact, you can buy a pen drive style card reader, which will reduce the storage space need by around half. Or you can buy a USB Hub which has a built in card reader!

Of course this setup is just going to be used as a backup system. I won’t be formatting memory cards which I am traveling, because it is best to have multiple copies of data, in case something gets corrupted or you misplace a memory card.