Yesterday I went to Chandni Chowk to complete my Strobist setup, which has been a long pending vision of mine.

Initially I was planning to go alone, but I got a call from Narender, informing me that he too was heading to Chandni Chowk to buy Elinchrom Strobes, so I decided to meet him at Chandni Chowk.

I decided to spare my bike of scratches (read) and took a battery rickshaw to metro station. Now this was my first battery rickshaw ride and it was sort of alright, though someone really needs to tell them about the invention of suspension, which can make ride quality far better! 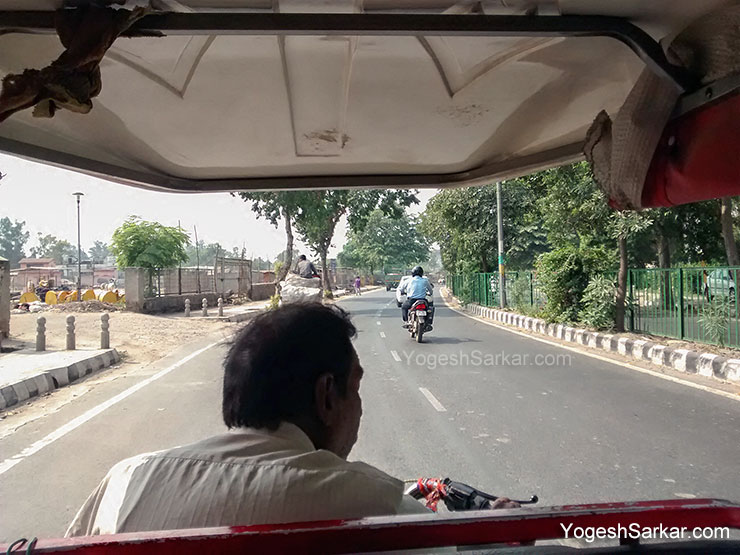 Metro as usual was crowded and I was bored as hell, by the time I reached Chandni Chowk. Met Narender outside metro station and we headed to the famous camera market. Checked some of the equipment rates with Madan ji and then headed to Pico Deals (9873374883).

We had already talked about the availability of Yongnuo YN560 III speedlight and RF-603 II C1 triggers on Facebook (which is what I wanted to buy.) Waited a while for Anubhav to get the speedlight and triggers and in the meanwhile checked out some of the other speedlights. While there were a few cheaper ones available, which were just as powerful as Yongnuo YN 560 III speedlight (guide no. 58 @ 105mm), none had built in wireless transmitter.

After buying the speedlight and triggers, it was time to head to Imperial Photo Store (9811066371). Narender bought Elinchrom FX 200 studio lights, while I checked out various light stands and umbrella adapters. Couldn’t make up my mind about the stands and umbrellas available at Imperial, hence we decided to check out rest of the camera market.

I eventually bought a medium size black and silver and a white shoot through umbrella from Simpex store. I also bought couple of umbrella adapters from a small shop in the market along with a light stand bag.

I also sold off my Canon 18-55IS lens for around 2.1k to Pico Deals (Anubhav’s brother has another shop near Golu).

Then we went back to Imperial and I bought the Simpex lightstands that they had shown us earlier, which I found to be of better quality than the ones I had seen at other shops.

With all the shopping done (including the famous jalabis), it was time to board an Uber X Taxi (review coming soon) and head back home.

Here is a group shot of what I bought from Chandni Chowk. 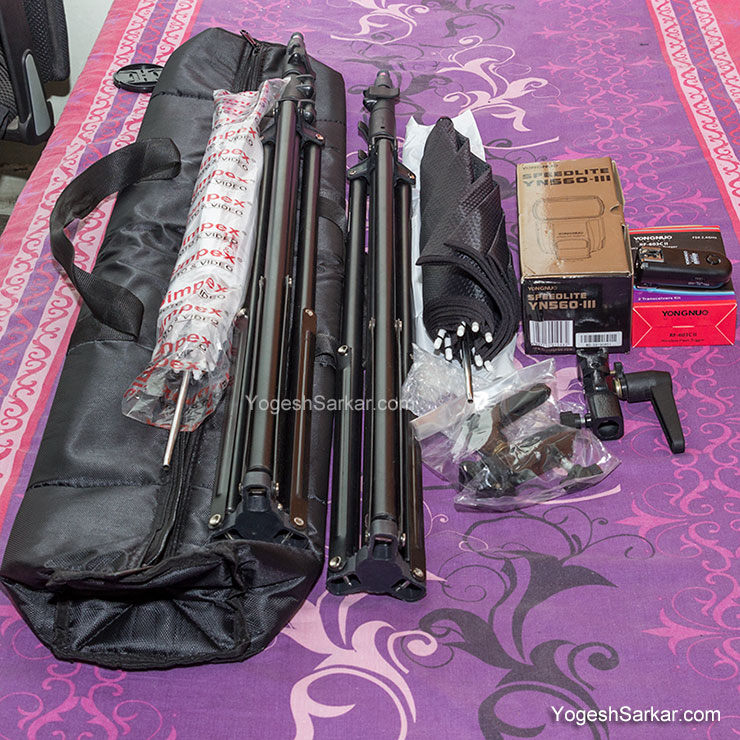 Yongnuo YN 560 III Speedlight and RF-603 II Triggers
Why I bought it?
Yongnuo is a good Chinese brand and YN 560 III speedlight is rated at guide no 58 and has a built in wireless and infrared receiver. This means I don’t need a receiver for 560 III; I can trigger it with my RF-603 II triggers wirelessly. RF-603 II triggers are transceivers i.e. they can work as trigger or receiver and operates at 2.4ghz frequency. II model features locking rings and has a max sync speed of 1/320.
Cost = Rs. 8,300

Simpex light stands
Why I bought it?
I needed a lightweight stand to mount my speedlights and umbrella. Simpex branded ones were cheap, light weight and felt better built than other stands.
Cost = Rs. 500 each

Simpex white shoot through umbrella and Black and Silver umbrella
Why I bought it?
I needed a light shaping tool to evenly distribute light for product and portrait photography. White umbrella spills the light everywhere and provides a soft light, while black and silver umbrella provides a bit more directional light. Simpex branded umbrellas were cheap and seemed better than the other no-name ones (couldn’t find Elinchrom umbrellas.)
Cost = Rs. 330
Update: Simpex white umbrella turned out to be quite fragile and couple of its arm support rods broke, even though I only used it twice and that too carefully at home! Black and Silver umbrella has stronger arm support rods, so it should be alright.

Heavy duty metal umbrella adapters
Why I bought it?
Unlike studio lights, you need an umbrella adapter to mount speedlights on light stand and you also need that adapter in order to mount umbrellas and soft boxes. I bought couple of metal ones, which are well built and will likely will last several years.
Cost = Rs. 250 each

Light stand bag
Why I bought it?
It is needed to carry and easily store light stands and other accessories. The one I bought can easily accommodate my light stands, umbrella adapters, umbrellas and still have some space left.
Cost = Rs. 350

Overall it was fun shopping at Chandni Chowk and I finally managed to complete my basic Strobist kit (I already have a Canon 430 EX-II Speedlight). Entire kit isn’t all that heavy and light stands along with adapters and umbrellas weigh around 5kg. So I can easily take this setup on location, if the need be.

Thanks to Narender for providing lovely company and advising at various juncture while buying gear.

Now it is time to log off and start playing with the new toys :).