I bought ON Gold Standard 100% Casein Protein Powder few months ago and now that I have finally finished it, I thought of posting a review of it. 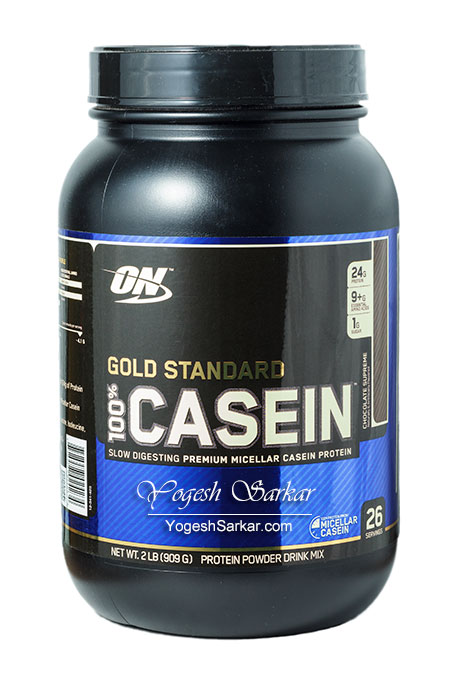 However, this scenario changed during Shradh and Navratri, when I do not consume eggs. So I needed protein shake not only in the morning and after workout, but also before going to bed. For scenarios like these, casein is perfect. Since it takes longer to absorb in body and thus maintains a more steady release of amino acids, kind of like eggs. With this in mind, I ordered a 2lb jar of ON Gold Standard 100% Casein (chocolate supreme flavor) in September last year.

Easy mixability for me is a top priority when it comes to protein powders, since I hate drinking lumpy protein shakes and this is one area, where casein is a real pain.

Once it is properly mixed, it doesn’t taste bad. Though since it has to be diluted quite a bit for it to be easy on the throat, there is not much sweetness left in the shake.

Like I said earlier, during Shradh and Navratri, I needed casein to compliment my usual whey protein shakes that I take twice a day. However once they got over and I could start eating eggs, I stopped using casein regularly.

However, since it took longer to digest than whey protein shakes and helped maintain satiate feeling for longer duration, I drank it whenever I had to go for an early morning photo shoot. In fact when I was leaving for Ladakh in October, I mixed casein with whey and used it regularly as first breakfast (I used to wake up at 4:30am and I never had real breakfast before 8:30am) and at times, dinner shake as well.

This I felt was the reason my body didn’t go into catabolic state and for the first time, I didn’t lose any weight while in Ladakh, even though I walked a lot more than I ever did before!

Like I said earlier in the review, for my use whey is a better bet than casein and I continue to believe that. However, I feel whenever I am going out for a shoot or traveling, casein or a blend of casein and whey is a better option than whey protein powder. And due to it, I not only took it to Ladakh, but also Vadodara, where I had to shoot a wedding.

While I am not quite sure if I will ever buy ON 100% Gold Casein powder for regular use, I am pretty sure I would be ordering another jar, before my upcoming trip to Ladakh. Though I really hope ON makes casein a little bit easier to mix, so that guys like me, can drink it with ease.