I had been thinking about doing a SD/SDHC card shootout for a while now, because even though I know from my field experience which cards are faster, I wanted to measure it in a more quantifiable manner and make it easier for others to understand, why I recommend certain memory cards over others.

In this test I haven’t tested all the 2GB memory cards I have lying around, which I rarely use and I have also excluded Sandisk Extreme 8GB 30mb/s card, since 45mb/s (write speed) cards are the ones which are currently sold in the market. 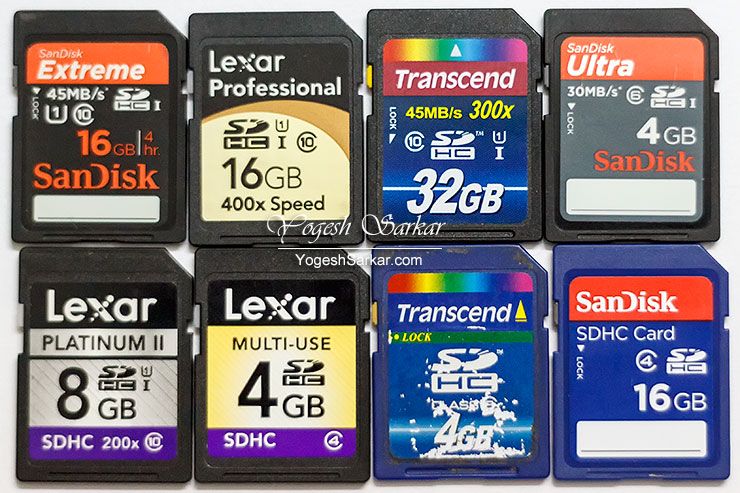 All 8 memory cards used in this test have been purchased by me and I use them regularly, though it is usually the fastest cards which see more action than slower ones, which are more of a fall back option, once I run out of fast cards.

I used my Canon 60D DSLR without any lens and in manual mode with ISO bumped to 6400 (to produce larger files) and shutter speed at 1/640 and in high speed burst mode. Each card was then formatted in camera (low level format) and I kept the shutter button pressed till the buffer got full. Each RAW file came out to be 23.2mb in size and each card went through 2 burst session and average of both has been written below, though test results for most part were same.

Essential thing to note in the test is not only the number of RAW images camera can take, before slowing down, but also the time it takes to flush its buffer completely and write to memory card. Since slow write speeds are generally what cause camera to become sluggish for extended period and as can be seen in test results below, can vary quite a bit from card to card.

I didn’t test the read speed of the cards (which manufacturers generally like to advertise), since it is only useful while transferring files from memory card to computer and is mostly dependent on your memory card reader (unless you have a high speed USB 3 card reader.)

As you can see from above test results, SanDisk Extreme 45mb/s 16GB memory card wins the shootout hands down and is the only memory card which allows the camera to shoot 18 frames. However Lexar Professional 400x 16GB and Transcend 300x 45mb/s 32GB aren’t that far behind and generally cost 30-40% less than SanDisk Extreme and ought to be more than enough for most users, unless you are regularly photographing wildlife, sports, weddings and other events which require heavy use of burst mode.