When I first received MobileLite Wireless G2 for review from Kingston India, I simply thought of it as a company built replacement of my DIY Portable Backup Solution for Photographers. However, after having had the chance to review MobileLite Wireless G2, I realized that when I assumed that, I was looking at this nifty little gadget through a narrow prism!

After all, it can not only copy files from/to your phone, tablet and laptop to an SD card or USB drive attached to it. It can also work as:

1. Media streaming hub for multiple devices.
2. Act as a Wi-Fi hotspot/router if you connect it to an internet connection via Ethernet cable or USB data card.
3. Act as a power bank for mobile phone or tablet, thanks to its built in 4640mAh 3.8v battery. 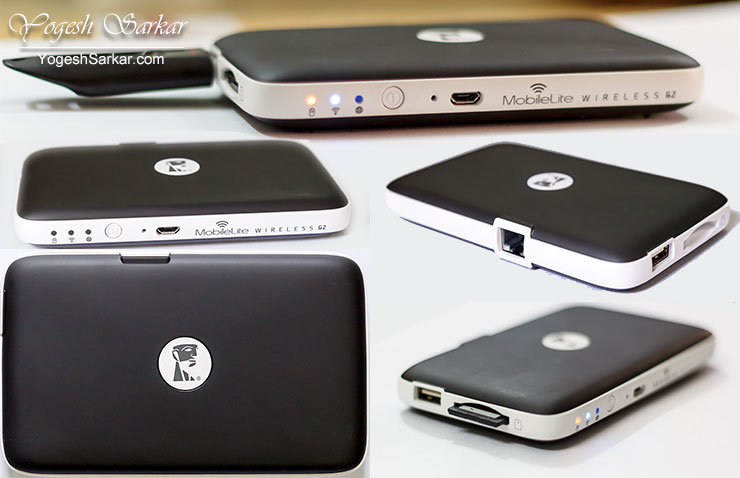 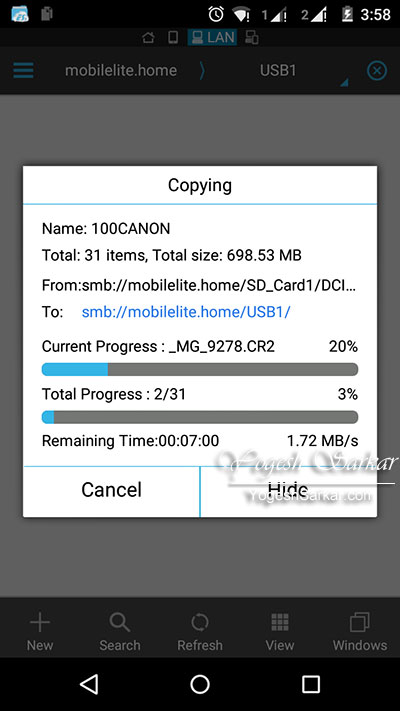 Connecting to MobileLite Wireless G2 over Wi-Fi is fairly easy and can be done without installing any apps on your mobile phone or tablet. This is what I did, since when I received MLW G2 couple of months ago for review; Kingston MobileLite app wasn’t compatible with Android Lollipop (compatible app is now available on Google Play).

So instead I just connected to it normally through its Wi-Fi network and then used ES File Explorer to browse attached pendrive and SD memory card and I was even able to easily transfer files from memory card to pendrive and vice versa!

Even though file transfer was around 3x slower than what I experienced while using Kingston MobileLite App, it was still manageable and I didn’t encounter any error, even when I ran ES File Explorer in background and continued to use my mobile phone for other things.

The only downside is, you cannot secure MLW G2’s network connection or connect it to another wireless network or use USB data card, without the App. Since its administration panel is only accessible via MobileLite App.

On the plus side, MobileLite App is fairly simple and straight forward to use! So even though I couldn’t use it during the testing phase on my Moto G and Nexus 7, I did use it with my Samsung Galaxy Tab 2 and it worked quite well.

Sadly I didn’t have access to 3G dongle and hence I couldn’t test that functionality.

I observed no compatibility issue at all while trying to connect my various SD cards (starting from 512MB to 256GB) and pen drives to MLW G2 and everything worked seamlessly.

I did try to connect a portable HDD to it, to see whether or not it can run it and sadly it couldn’t (technically it wasn’t supposed to, but still I had to find out).

Battery backup of MobileLite Wireless G2 is quite good, when you are using it as a wireless router or for media streaming and Kingston claims it can run for up to 13 hours, without requiring a charge. While I couldn’t use it continuously for such a long time, I did run tests for a few hours and its battery held up pretty well during that period.

It seems to work as advertised i.e. it is able to easily charge any mobile phone or tablet, which can be charged using USB connection. Neither Moto G nor Nexus 7 had any issue using it as a power bank and both happily replenished their charge through it.

File transfer speed was a bit of a letdown, since it took around 4 minutes to transfer 31 RAW files (698.53mb) from SD card to pendrive, even though I was using Kingston Professional 256GB SDXC card and SanDisk Ultra 64GB USB 3 pendrive. Transfer speed from mobile phone to pen drive or vice versa took around half that time.

Overall Kingston MobileLite Wireless G2 is a great gadget to have for travelers and techies alike, since it manages to squeeze in multiple gadgets into one portable (same size as a 2.5” external HDD) and easy to use device and doesn’t break the bank while trying to do that (MRP. Rs. 5,500, available on Flipkart for Rs. 4,500). In fact it was one of those few devices, which I have been missing a lot, since the time it went back to the company after review and I might just buy it before my summer trip to Ladakh.