It is funny how much we are blessed we do not realize, until something bad happens to us. Past few months had already shown me how blessed I am to have such wonderful friends and family, and today I got to learn some more as I got into an accident today.

I decided to go for a late evening ride around 7:30pm and just as I was turning in front of the Air Force base, heading towards Gurgaon, I smashed my bike into a large pothole and lost my balance. I didn’t see it, because I was overtaking a bus but thankfully I only crashed and didn’t get run over or anything.

A security guard from a cash van helped me pick up my motorcycle and even though I was really feeling the pain, I decided to ride back home.

Once home I took off my shoe and found bleeding from under my toe and saw something sticking out, not sure what it was, I decided to call a Uber cab and head to Kalra Nursing Home. Poor cab driver had to negotiate back lanes as there was weekly bazaar in front of my home and he drove slowly to the hospital, never complaining once!

Once at the hospital, I got bandage done, since wound had leaked some blood on to my slipper and also went in for xray. Good news was, there was no fracture. Bad thing, there is no a gap between bones of my thumb, which supposedly needs surgery. 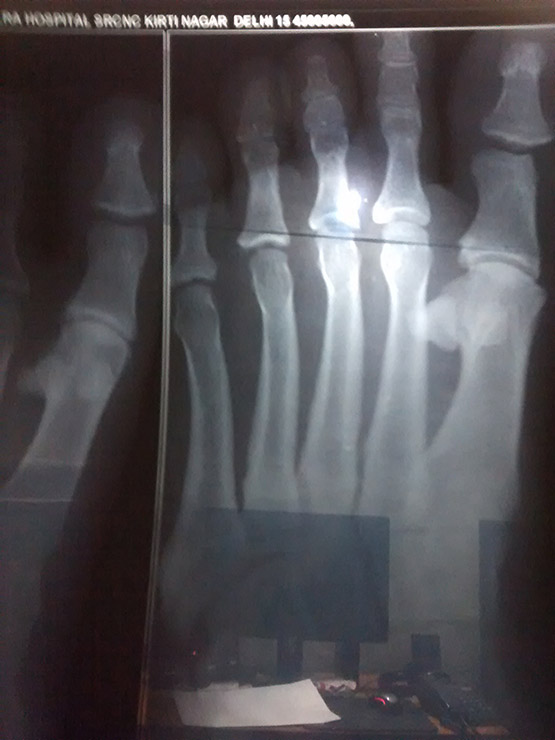 I decided to head back home and get a second opinion from another doc. And called another Uber cab for it and once again, driver was super nice!

While my entire body is paining now and I have yet to eat any medications, I am thankful to God for what he has done for me. For I had the luxury of going to hospital on my own in a comfortable cab and in that private hospital I was chauffeured around in a wheelchair. In contrast I had seen a security guard with broken foot dragging it all on his own through a government hospital. Because he was poor enough to not be able to afford private care and like me, didn’t had anyone at the hospital.

Now my only worry is that my back might get a set back from the recovery it has made in past one and a half years and at least for a few days, I will be grounded in Delhi.

Oh well, that is what life is. Lets see how I feel tomorrow, after I wake up :D.