How far would you go for love?

I don’t think anyone, not even the best poets in the world can answer this question; at least I know I can’t. So when I began reading “The Choice” by Nicholas Sparks, I began to contemplate this question as well. However I couldn’t do it for a long time, because the narrative and the story itself, steered me away from it, at least till the first half. 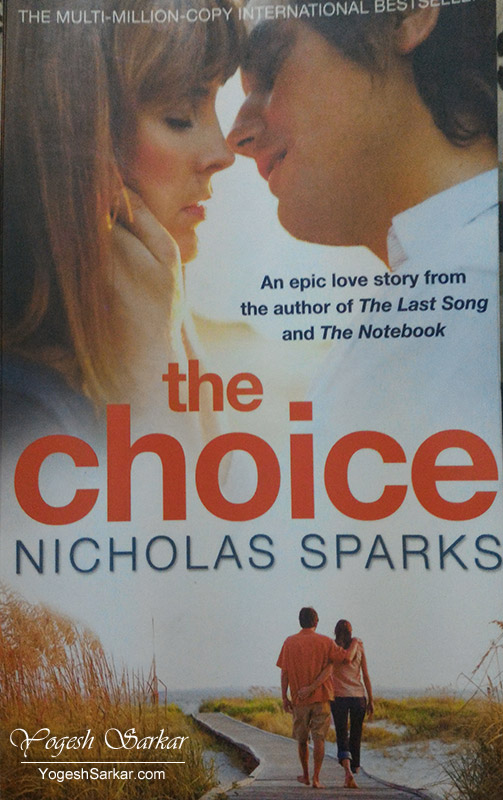 The Choice is the second novel I have read of Nicholas Sparks, with the first one being Message in A Bottle and I initially expected Nicholas to use similar writing style as he did while writing Message in A Bottle, however I was pleasantly surprised to see a completely different avatar once I began reading The Choice. Since it had a lot more playful undertone in the first half than Message in a Bottle, which was more on a serious and somber side from the beginning.

However narrative style of Nicholas Sparks was as impeccable as it was in case of the first novel of his I had read and I once again thoroughly loved it.

The Choice is a story of two different individuals from completely different backgrounds and with different temperament falling in love with each other, even though the female protagonist is already in a long term relationship. While this part of the story made me frown a little bit, because I am a firm believer in commitment and honoring those commitments. I guess love knows no bound and you have to respect that fact, even though it sounds wrong at so many levels.

That part aside, The Choice is a really wonderful novel with a lovely playful and at times comic storyline in the first half of the story and it really gets you going and never fails to put a smile on your face. However in the second half it becomes quite serious and as Travis Parker (male protagonist) is faced with the most difficult question of his life, one begins to feel the emotional burden he is in and turmoil he goes through, as he tries to put on a brave face in front of his two young daughters.

The story then reaches a crescendo towards the end, where Travis does what you may or may not have expected him to do in the end and while we contemplate righteousness of his decision, Nicholas beautiful manages to end the novel, which ends all doubts and question in a few pages of writing.

Even though I did feel ending was a little too abrupt, I guess in a way it was good, because it doesn’t let you think much once the crescendo is reached and turns everything upside down and before you know it, story has ended and you left with a… well I better not spoil the end by revealing what it leaves you with.

In any case, I have two more novels by Nicholas Sparks in my bookshelf and while I am not sure whether I will start reading The Notebook first or A Walk To Remember, I know I wouldn’t be disappointed, going by the first two novels I have read by Nicholas Sparks.