From 4th October to 9th October, all I did was work on my novel and occasionally meet a few friends who were there in Ladakh during that time.

From exploring Leh on first day (2nd October) for 3 hours on foot, finalizing a few things for upcoming tour and a business meeting, I really didn’t do anything. Then the pain increased so much that I wished at one point to cancel taxi I had booked for next day and instead fly back home. I was awake the entire night, not really sure of myself. Even the supposed sunrise shoot for which I had booked a taxi didn’t really workout well, as I just sat on a piece of log watching the sunrise occur, after shooting a few frames at predawn.

In the afternoon I met Yayati, who in turn took me Capt Suresh Sharma and his caravan, while talking about other things did take my mind off of things, I was still not sure I will be in Leh anymore.

There were times when even my beliefs got tested, but then again beliefs have to go through tests to remain true and important and in the end, I knew I had to finish what I started, no matter how difficult or painful things got.

From 4th October to 9th October, my routine was to wake up in morning, get ready and then walk over to Yama Coffee House around 100mtr or so from Otsal Guest House I was staying in. Then sit there in the sun, working on my novel or just sitting and thinking, till 3pm. Then walk back to my room, sit on my bed and watch birds fly, dogs run and time pass till about 4:30pm, before walking back to Yama Coffee House and staying there till 8pm, before returning back. 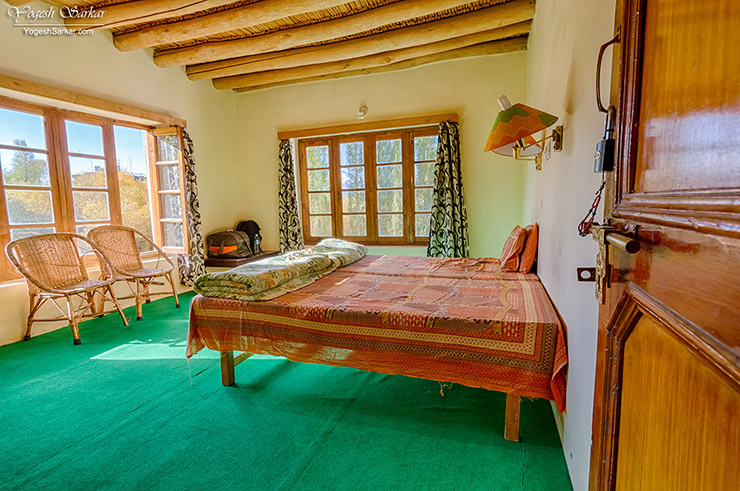 I had no TV in room, no games in my mobile phone, occasionally working slow internet connection, single song that I listened to occasionally, limited interaction with others and no desire to make friends with other regulars I saw at the Coffee House and exchanged smiles with occasionally.

There was a night I stayed awake till 5am, doing nothing except thinking and at times writing a bit. Strangely I never got bored and while there were times I felt lonely, that was more due to the plot of the novel than anything else.

I always used to run from one thing to another, taking on multiple things at time. On this trip, I concentrated on one thing at a time. If I was writing, then nothing else was allowed to intrude into the process. If I was eating, I kept my mobile phone and diary at bay. If I had thoughts running all over the place, I would put everything aside and just stare off into the distance, thinking.

In some ways it was like meditation, in others it was just prioritizing things and putting thing which mattered first and working on them.

Only when the first draft was complete, did I thought about sightseeing and called Dorjey Chubi Inder (+919906971501) for Nubra to do a little bit of photography (more photos can be seen here).

In the end I came back with the first draft of the novel I had started working on, a new outlook on life, 3 photo projects which are likely to keep me busy for at least 5 years, 3 novels I would be writing in the next couple of years, a calmer heart and deeper understanding of emotions.

Thing is, you have to stay alone in isolation at times to discover that you can live all by yourself, without anyone and have completely uncomplicated and peaceful life. Yet wish to have certain people in your life, even if they complicate things, because they are worth each and every trouble in the world, for they are the people whose happiness brings you more peace and happiness to your heart than even your own. Thankfully I have 6 such individuals in my life and I know in my heart, that there isn’t anything more I can ask for, even though as a human I will always seek more…