Love has the capacity of teaching us more than any classroom or any ad campaign in media or trends on social media can ever teach us.

I was twelve then, in love with the brown eye furry kid that had come into my life barely 8 months ago and made me realize for the first time that what parenthood can be about, though I didn’t know that then, but now that I look back, I feel that way. 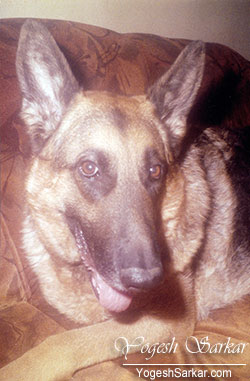 Roxxi, the cute little German Shepherd, who was larger than most male German Shepherds and yet she was the darling little kid of our home. Because she had the capacity to not only make me and my mom fall in love with her (it was my demand for a dog that my mom finally agreed and we bought her), she had also managed to smitten my sister who until then was afraid of dogs and my dad, who was strongly against getting any pet, let alone an expensive pedigreed dog!

Back then there wasn’t much if any noise against crackers, let alone demands of banning them, at least I hadn’t heard about it back then. However all of us knew crackers played havoc on dog’s sensitive ears and as Diwali came closer and closer, it became amply clear to us that Roxxi was not only afraid of cracker’s noise, but she used to get quite nervous when loud ones were burst nearby.

So for the first time since I could remember celebrating Diwali and asking mom and dad continuously for loud crackers, I didn’t want any crackers. While on mom’s insistence got a few anars (noiseless one) and phuljhari, that was all we got after 1995 and for the past few years, we have even stopped getting those, even though Roxxi passed away in 2000 and since then we haven’t gotten any furry family members.

Now I am not in the habit of telling people what to do and I am certainly not going to do that today. However I am requesting you, for the sake of animals which share this world with us and old and sick people who too are distressed by loud noises, to avoid bursting crackers which create loud noises.

Celebrations and having fun is all fine, but it shouldn’t come at the cost of someone else’s pain or worst still, life.

Celebrate Diwali like it is meant to be as per Hindu traditions, with Diyas and Mithai. And a prayer to Gods to give not only us, but also everyone else the peace and prosperity they pray for, be it humans or animals.